Norfolk Developers is an extremely active group. Every month, usually on the first Wednesday we run our regular evening event at 6.30pm at the Kings Centre, which consists of two 45 minutes tech presentations. Usually one presentation is given by a local speaker and the other by a visiting speaker. Most months we we also run a full or half day hands on workshop, also at the Kings Centre. And of course, every February, there’s NorDevCon, Norfolk Developer’s one day Agile and Tech conference.


It’s been a busy year already and there’s even more to choose from in the autumn.


Starting with the September full day hands on workshop is being run by Rainbird on Monday, 15th. Norfolk Developers is delighted that Rainbird have chosen to run their first hack day with us. Rainbird is a cloud-based artificial intelligence platform that enables developers, businesses and students to create powerful expert systems on any subject.  The Rainbird development process starts with a visual process similar to mind-mapping (they call it knowledge mapping) and is backed by a new XML-based knowledge representation format called RBLang.  During this inaugural Rainbird Hack Day, 30 developers will have just one day to conceptualise, collaborate, create, build and present a Rainbird driven application that demonstrate creativity and innovation around any theme. Developers can enter individually although small teams of 2-4 are recommended. To get your creative juices flowing, access to Rainbird will be available in advance (from 1st September) and there will be an introductory webinar run 10.00am on Friday 5th September.


We’re starting early in October with An Evening with AWS (Amazon Web Services) on Wednesday, 1st. AWS are returning to Norwich to take both 45 minute sessions. They asked us what we’d like to hear about and so far a number of people have asked for an introduction to AWS. This is looking like the most likely topic, but will be confirmed nearer the time. There are currently plans for an AWS workshop on the following day, which will most likely provide hands on exercises based on the material covered the night before. 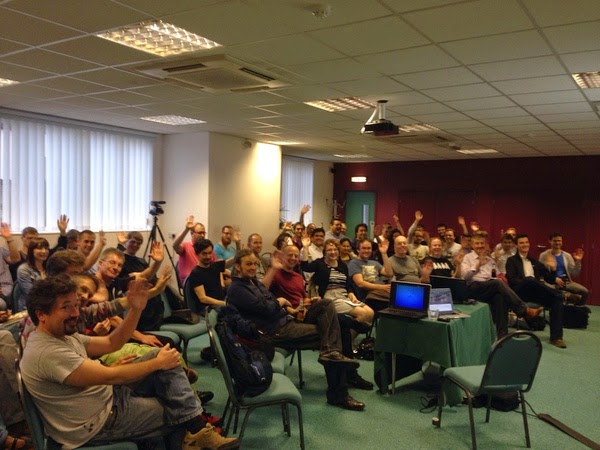 Our regular October hands on workshop is at the Kings Centre on Tuesday 21st October and is a Behavior Driven Development (BDD) full day workshop with Seb Rose. It’s a practical introduction to using examples to specify software. You will learn to break down complex business requirements with your stakeholders using examples in their own language, giving you the tools to explore their ideas before any software is written. You'll use pens, cards and other bits of paper, so you won't need to know any tools in advance, or even remember your laptop! This course works best when we get a mix of product owners (or BAs), testers and developers all coming along - because you're all essential to a successful outcome. This workshop is based on our successful BDD training at Kickstart Academy, using exercises and examples that have been tested on hundreds of delegates. Seb Rose has been a consultant, coach, designer, analyst and developer for over 30 years.


November sees the return of Tim Ruffles and the hugely popular and previously oversubscribed Introduction to AngularJS hands on full day workshop at the Kings Centre on Monday the 3rd. If you missed out last time, now’s your chance. This is followed on Tuesday 4th of November by an AngularJS Advanced/Internals full day hands on workshop, also with Tim Ruffles at the Kings Centre. We’re still waiting for the final details from Tim, but you can sign up for both workshops now on the Norfolk Developers meetup site.


My belief, from what I see going on around me, including the drop in attendance at a lot of technical meetups is that Norwich has reached saturation point. This is why when Mark Pryce-Maher contacted me about starting up the SQL users group in Norwich again I was pleased that he thought merging it with Norfolk Developers was a good idea. This means that every quarter we’ll have at least one SQL or database based session at one of our evening events and hopefully some SQL and database based workshops too.


The first of these events is in November on Thursday 6th at Kings Centre at 6.30pm. Again we’re missing our regular first wednesday of the month slot so we don’t compete with bonfire night. Mark Pryce-Maher will be giving a SQL based presentation and NorDevCon and workshop favorite Richard Astbury will be talking about an interesting project he worked on a little while back, where his team took patient notes from an A&E department, and wrote some code to do natural language processing to extract valuable information from the free text. This was then used to inform clinical decision making in the hospital.


That’s all we have confirmed for the autumn at the moment. We’re in discussions for something big in December. It’s all going to depends on availability and the speaker being in this county. All I can tell you at the moment is that it’s one of the original authors of the Agile Manifesto. You’ll have to wait and see to find out which one. 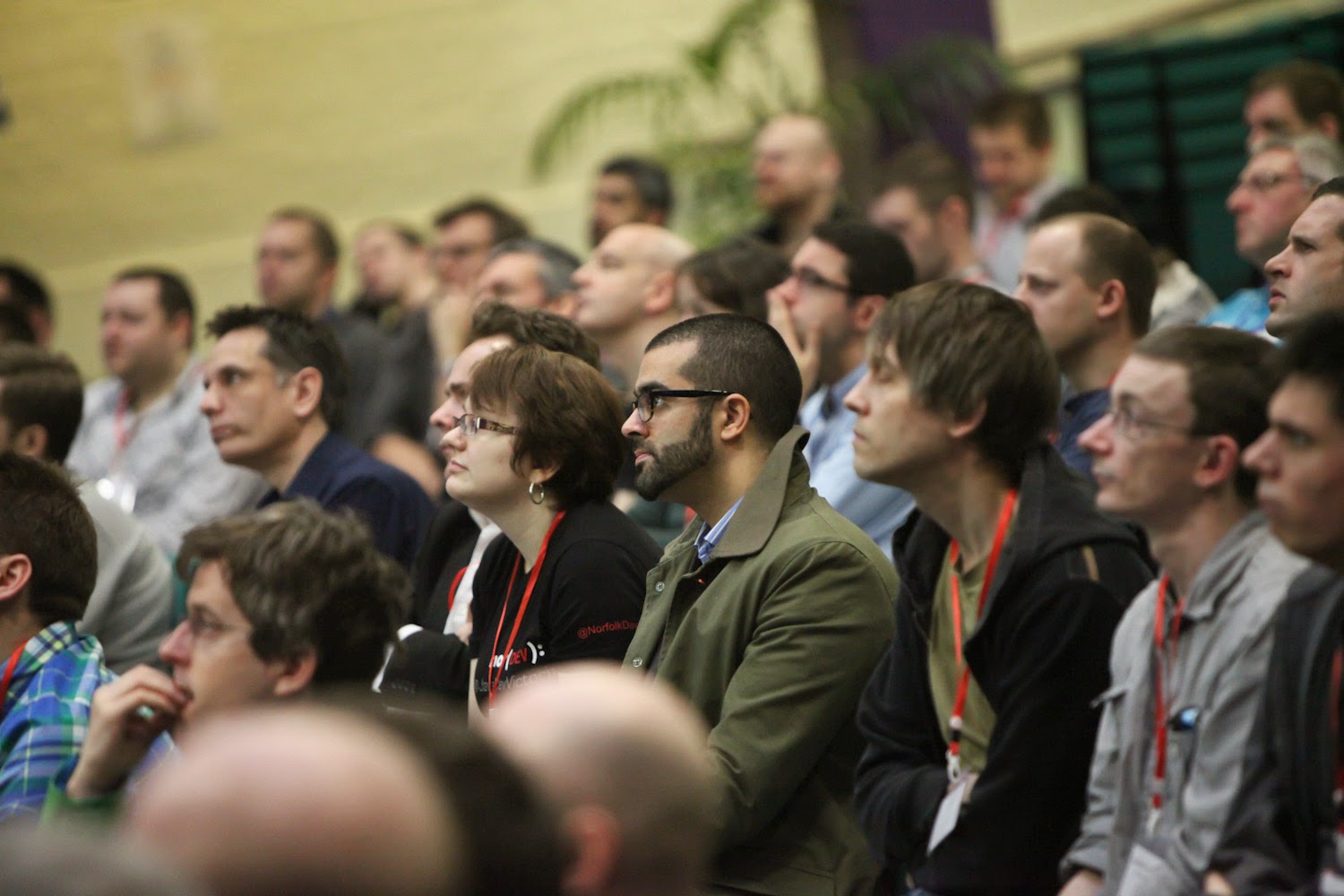 Even though it’s many months away, we’re already deep into planning NorDevCon, which will take place on Friday 27th of February at the Knigs Centre in Norwich. Now in it's third year, NorDevCon has traditionally been a tech and Agile conference. This year we expanded to include a track on Cloud & Big Data, a hands on workshop track and a local speaker and SyncDevelopHER (a local group promoting women in IT) track. This year we attracted about 170 people from 180 ticket sales. Mostly those who attended were developers, business owners and Agile practitioners. Next year we are hoping to attract 200+ techies and Agilists and around 100 business people, who aren't necessarily techy but have an interest in technology. To do this we are going to make some of the sessions more business focused. Every session will have a rating indicating how techy and how business focused it is to help people decided which sessions to attach.  But of course if you’re in it for the hard-core tech and agile content you won’t be disappointed either!


A number of speakers have already been confirmed and we hope to have the rest confirmed by the end of September. I’m delighted to be able to tell you that Jon Skeet, who was hugely popular at this year’s conference, will be giving the opening keynote at next year’s conference and telling us about Developing Passion in many Senses. Jon will also be giving a session on C# 6.0. The also hugely popular Harry Harrold and Rupert Redington will be giving the closing keynote and speaking about "Agile apocrypha and an ad-hoc manifesto”. This will be as entertaining as it is informative and give a more gentle wind down at the end of an intense day. Other confirmed speakers include:

You can expect all the good stuff from last year like the wine reception and conference dinner and we’ll be publishing the sponsorship packages as soon as they’re finalised over the next few weeks.


Kevlin Henney and one other will also be giving short presentations at the pre-conference event the evening before at the Kings Centre. This will be followed be an informal dinner at a local restaurant.


I’m sure you’ll agree that it’s an exciting and busy time for Norfolk Developers. We put these events on for you, the Norfolk Tech Community, so please do come along and enjoy!