Just like last year I stayed in a Travelodge in Derby the night before Bloodstock, which makes the first day shorter as I don’t need to leave Norwich at stupid o’clock to catch the bands I want to see. After a short jaunt down the A38 to the Burton-on-Trent Central Premier Inn to meet Andy (who was late as usual) we got to the arena just as Bloodshot Dawn were starting their final song. It was amazing! Progressive death metal. I'll be ordering something of theirs as soon as I can.

Next up were the first band of the day I'd actually planned to see, Entombed AD. Basically the same band I used to go and see when I was at University, although they were just called Entombed then, and basically the same performance. Still good though.

Then came Primordial. Every year there are bands I don't know announced on the bill that sound interesting so I buy some of their stuff. Primordial were the first of these bands. I really like the couple of albums I bought and the performance was excellent. Dark, moody and well played. I've always been into My Dying Bride and more recently Swallow the Sun and really like this sort of doomy metal. Primordial are in much the same vain.

I'd never heard of Flotsam And Jetsam and as they were described as old school thrash, I didn't have high hopes and to begin with it looked like my fears were realised. Then, about a third of the way through their set, they played a new track that was just amazing and they continued to improve from that point on.

Most people only know Prong for 'Snap your fingers, snap your neck'. I had that album when I was at school, but never got around to buying it on CD until I heard they were playing at Bloodstock. It's great and Prong's performance was even better all the way through. They have a unique thrashy sound that really just works.

Triptykon were as expected, which was mediocre. I've got all their stuff and I quite like it, but I have to be in the right mood. They're one of those doom metal bands that are verging on good. They played well, but there was little interaction with the crowd.

I skipped Hatebreed on the main stage, mostly because they're rubbish and went to see Winterfylleth in the Sophie Lancaster tent, which was also a good way of missing the torrential rain. I was told they were a bit black metally and they were! Although no corpse paint, which is also refreshing. The British band were having some sort of technical difficulty but when they did play they were very good. 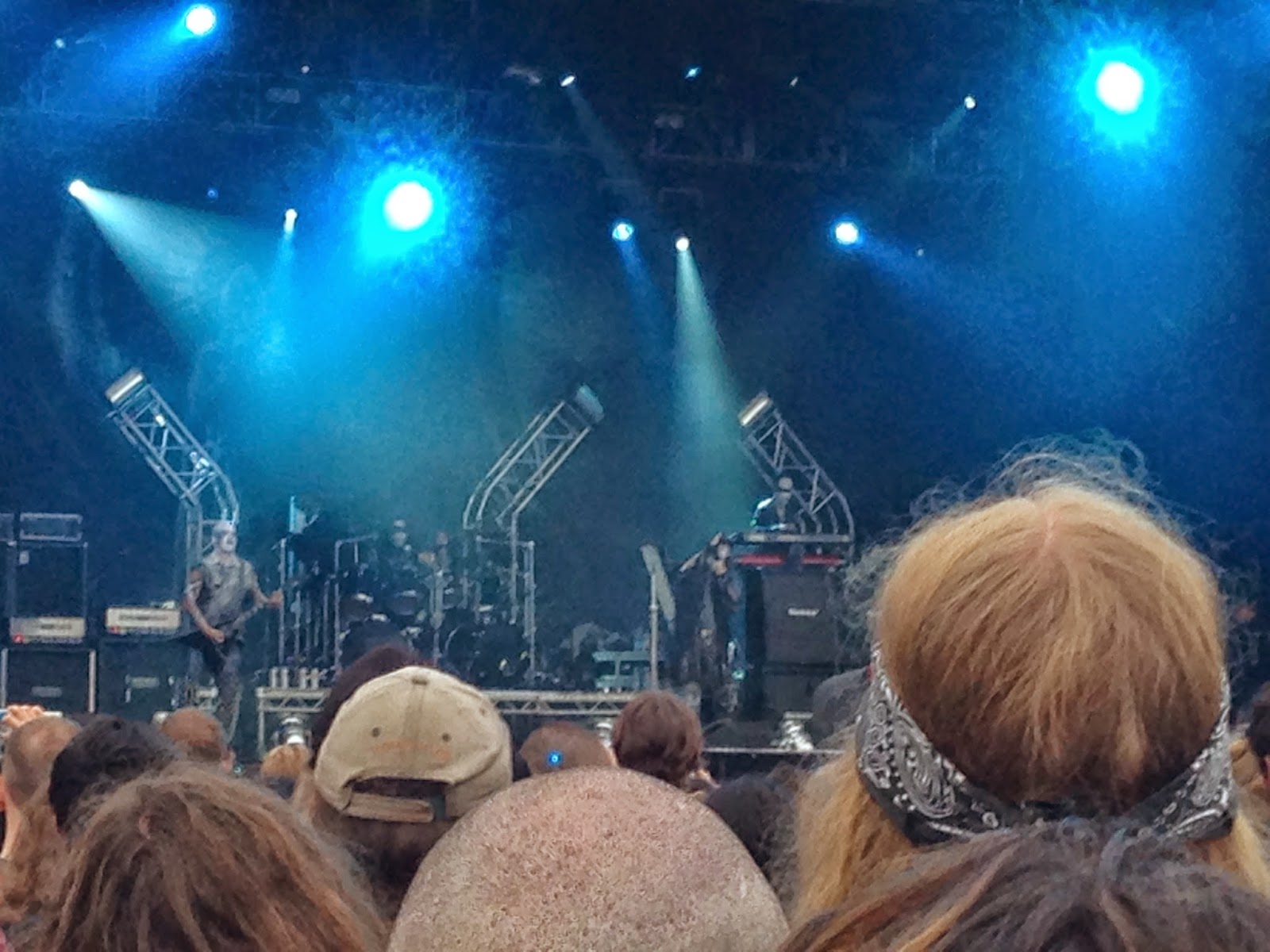 Dimmu Borgir also had their share of “Technical Bullshit” and were half an hour late to the stage, played one song, had more technical difficulties and disappeared for another five minutes. When they came back they played a, shortened, blinder. These days Dimmu are always good and they do seem to play lots of their songs that I like, which, to be fair, is most of them!

I had intended to go and see Rotting Christ as although I quite like the recent Down EPs, I'm not a fan of their original albums at all. The problem is I got comfortable in the Rock Society tent and Down were not only quite good, but Phil Anselmo is very charismatic and quite entertaining. So I stayed put. At least until I got cold...

As I walked into the Arena from parking the car, Evil Scarecrow, a band I know nothing about were playing. Apparently they're unsigned and have played Bloodstock a number of times before. They were hilarious. They reminded me of Devin Townsend doing Ziltoid. They had cheap, but great stage props and lots of silly dances that the audience were all to happy to do, some of them dressed as tin foil robots. Just brilliant.

Shining shouldn't have been allowed on any stage at Bloodstock. 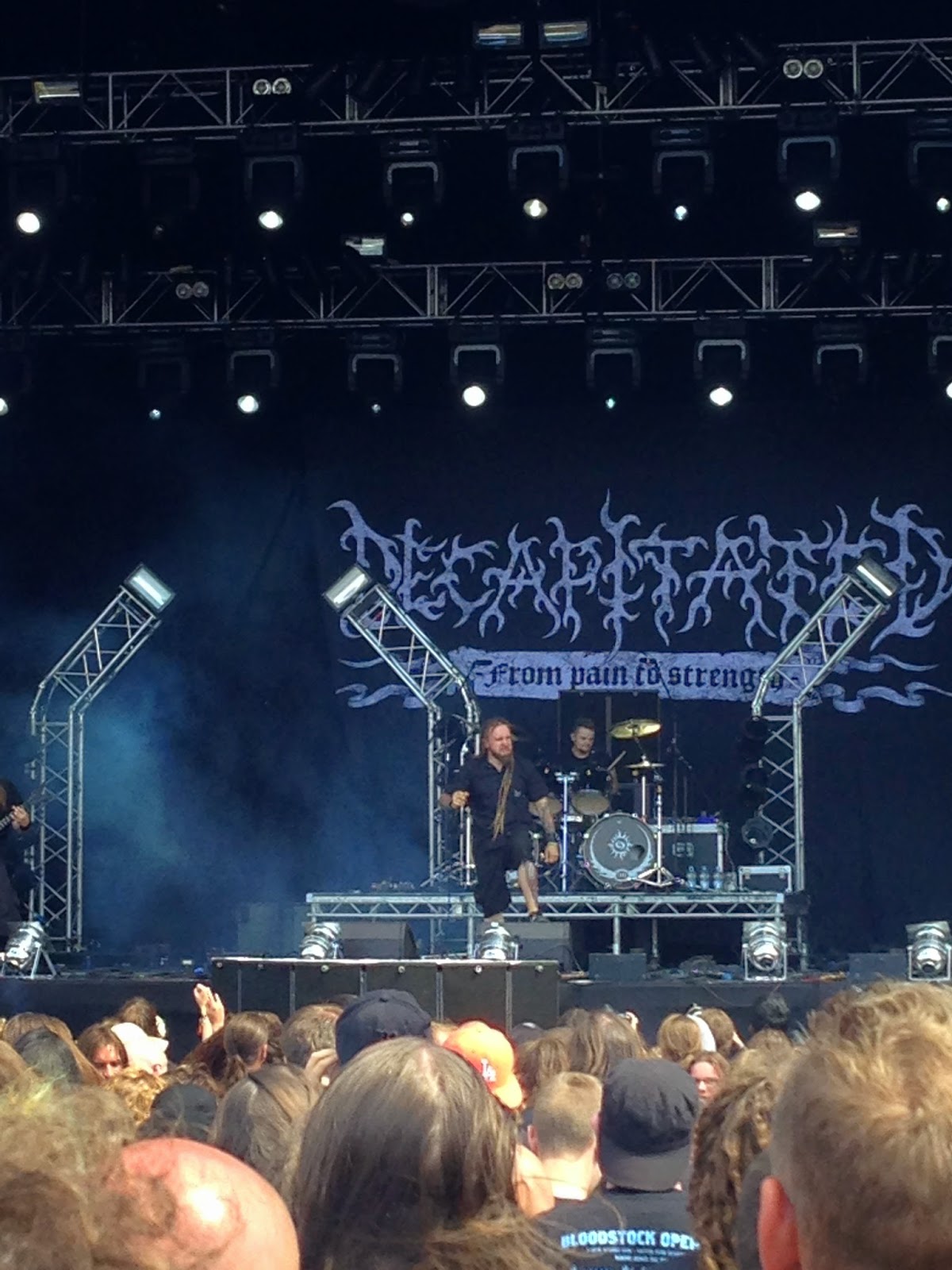 In 1993 I really got into Megadeth and a friend of mine from school lent me all their stuff and some Iron Maiden too. He wasn't really into Metal any more unless it was death metal. He mostly liked Grunge then. One of the Death Metal bands he liked was Vader and he played me a music video of theirs. I didn't really like it. In 2005 I found myself in San Francisco wandering round a large record store and there was The Beast by Vader. So I thought I'd give it a go, along with an album by Zyklon (are you seeing the BOA 2014 connections here?). I loved them both, especially the Vader album. As I found out more about them I discovered other Polish progressive death metal bands like Behemoth and Decapitated. I love them too. In the years since I've seen both Vader and Behemoth twice, but never managed to see Decapitated until today. They were fantastic. Like many of the other bands on the Bloodstock bill this year, they suffered from a poor guitar sound and in Decapitated's case in particular they could have done with a second guitarist. However, they were tight heavy and really rather wonderful.

I first saw Orphaned Land at ProgPower, the very short lived Power and Progressive Metal festival, in 2006 and thought they were good. It took me quite a while to get into their album Mabool and I never really got into the follow up, The Never Ending Way of the Warrior. However, their latest album All Is One is fantastic and I have played it relentlessly. I missed orphaned Land in Norwich recently so I was glad they were playing Bloodstock and they were very good, especially when they did Brother, my favourite track from the album, if not from the band. The vocalist is especially good. Again the guitar sound could have been better. As an Israeli band they of course mentioned the war in Gaza and how Palestinians were their friends.

I ignored Crowbar from the Rock Society tent.

For a band with one good album and two good songs on another album and a history of being crap when I've seen them before, Lacuna Coil were definite contenders for band of the day. Looking like they had a new drummer and a guitarist down, they put on the best show I have seen them do. I really enjoyed it. 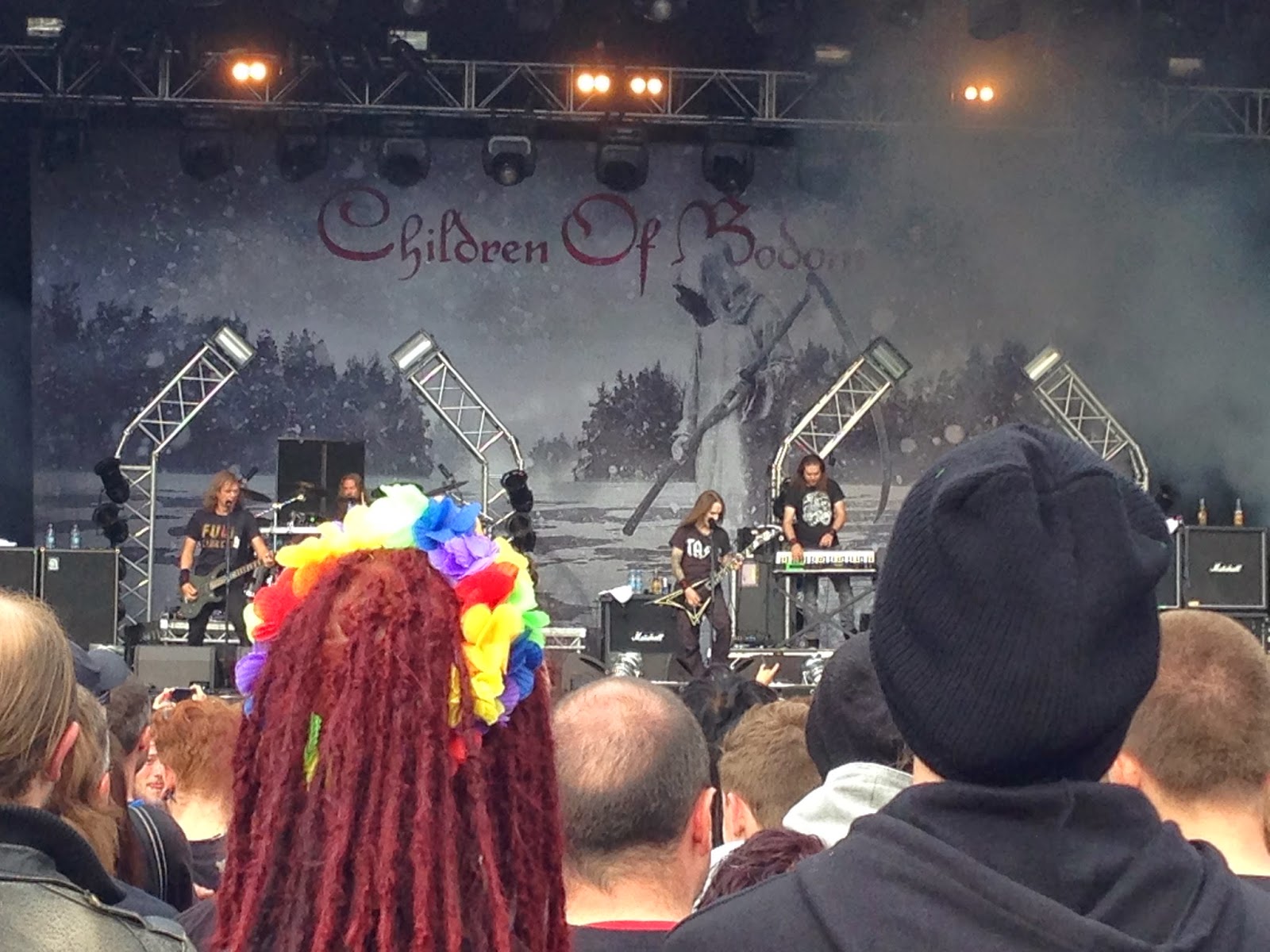 Lacuna Coil's fly in the ointment was Children of Bodem. Fast, heavy, entertaining and lots of fun, Children of Bodem were just superb. You can't fault them in any way. Their new album is another one I've had on constant play and it's really helped me appreciate some of their other more recently albums too. These guys should get a headlining slot.

What's going on with Carcass? They are the band of the day, but what was going on with the guitarists? They seemed frequently out of tune and out of time. It didn't stop them being brutally heavy or entertaining between songs. A few seconds into the second song the power was pulled as someone had collapsed in the crowd. This resulted in the band being asked to cut their set short, which they refused to do and whinged about. Good on them though. I can't tell you how much I enjoyed their set.

I didn't have high hopes for Emperor as, even though it was the first album of theirs I bought (along with Godless Savage Garden by Dimmu Borgir in Glasgow) I'm not the biggest fan of it now. In some ways my fears were realised as they didn't play a single song I really knew (nothing from Anthems to the Welkin at Dusk or IX Equilibrium), but the problem is they play them so well and the music really is quite good, so again I came home (in the rain) having really enjoyed their set.

I opened the Premier Inn curtains on Sunday morning to find torrential rain, so we skipped our usual VIP area breakfast and had it in the Beefeater next to the hotel instead before adorning full wets and heading for Catton Hall.

After the long walk from the car I caught the tail end of Arthemis, but they didn't make enough of an impression on me for me to be able to remember anything about their set. 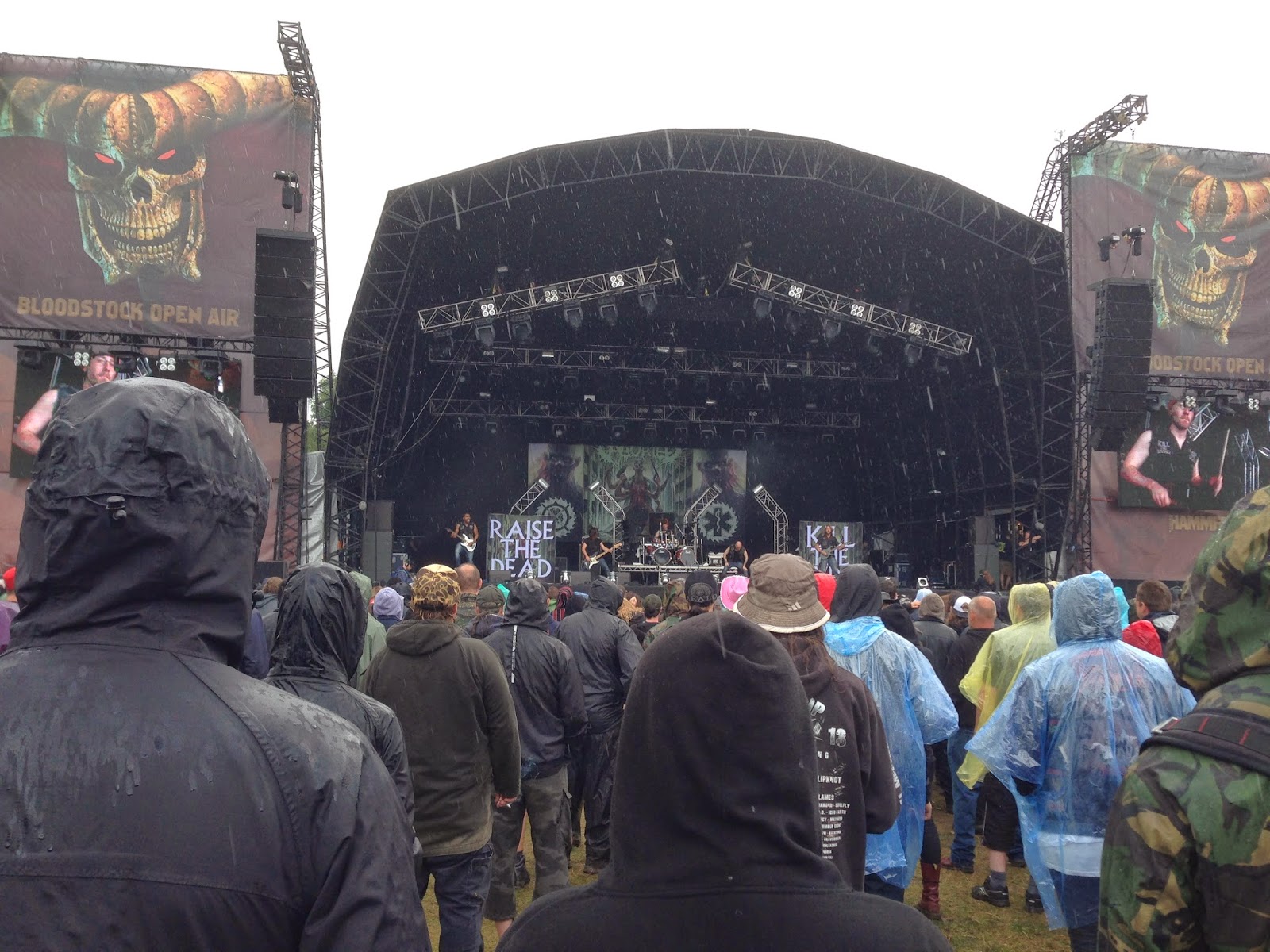 I was really looking forward to Aborted and they were incredible. A tight, excellent performance playing lots of stuff from their new album. With bands like Aborted (and Decapitated) it doesn't matter what they play because it's all good. The only thing that let them down was their attitude to the crowd and the over exaggerated “don't give a damn” attitude that was completely unnecessary. It won't stop me seeing them again though.

I was hoping Revamp would be so much more, but I was being unrealistic as although their album is very listenable, it's not great. I love Floor Jansen. She was great in After Forever and singing with Star One and I can't wait to hear what she's like with Nightwish, but Revamp just really never got going. The problems with Floor's microphone didn't help through the second song, but at least provided some entertainment.

I remember having an argument at school about Biohazard. One of my classmates was really into them but would argue relentlessly that they're not a metal band. I know different. They were excellent. Full of energy, great songs and as you would expect, got loads of the crowd up on stage at the end. They were good enough to get me to order one of their old albums.

Graveyard's flight was delayed, so they were moved to the Sophie Lancaster stage later in the evening and replaced by Avatar. I'm not really sure what to say about them and their little drummer boy attire. They reminded me of Deathstars (who once played the indoor festival), but not as good.

I missed Obituary the last time they played Bloodstock as we had a new baby. I was very disappointed as I've been into them since World Demise and regularly get out their old and new stuff but have never seen them. They were fantastic. I didn't recognise a single song, but they're another of those bands that just sound great, so it doesn't matter what they play.

By this time we'd been thrown out of the Rock Society tent as the wind had made it unsafe and I was cold and tired, so I decided to skip Saxon (who I don't like anyway), Amon Amarth and Megadeth. I've seen Amon Amarth twice before at Bloodstock and Megadeth many times in various places. Apparently Megadeth were very good, but getting home to my family a night early was too appealing.

As usual, I'm already looking forward to next year.