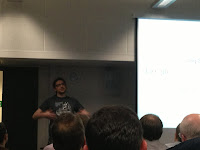 Rivalry is a good thing. Well, healthy competition at least. When you look back through history the major times of technological progress have been at times of war and competition. The first and second world wars. The nuclear arms race between the Russians and the Americans during the cold war. The space race. Formula one teams. And the Shadows (Babylon 5 reference - not Cliff Richards lot).

Last night was the very first SyncIpswich. SyncIpswich is the first SyncCity spin off from the hugely successful SyncNorwich. Carl Farmer is doing an incredible job. I first met Carl at Agile Cambridge a few years ago and he’s another Smart421 associate, like me. Coincidentally, I also met tonight’s speaker, Google’s Daniel Wagner-Hall at the same conference in the same year. It’s funny how these apparently small coincidences trigger much bigger things in the future.

The reason I feel Carl is doing such a good job is that there was standing room only at the very first SyncIpswich. Ok, so the room could have been bigger, but 70 people were crammed in! There were only about 60 people at the first SyncNorwich and, ok we didn’t have google, but there were three feeder groups. Whatever way you look at it, it was superbly impressive tonight.

Smart421 have been amazing sponsors and supporters of the whole Sync brand. Much of this has been down to the sterling work that Joseph Spear has done. Tonight we also had Neil Miles, the MD of Smart421. He gave a rousing speech about making Ipswich and Suffolk  the next Silicon Valley. I would of course fully support this, but I’d like to see Norwich and Norfolk have the same transformation, if not at the same time, then first. It’s slowly happening with SyncNorwich and SyncIpswich and while I hope they work together, I also hope they’ll both grow off the back of very healthy competition.

I was born in Norwich and have lived there for most of my life. My dad was born in Mildenhall (Suffolk) and my mum was born to British parents, in Turkey and grew up in London. Of course no one this evening knew any of that detail, so when Carl introduce me prior to my short history presentation, as being from Norwich I got a few (friendly) groans from the crowd. Needless to say the second slide with the biggest Norwich City badge I could find lightened the mood considerably.

Dan Wagner-Hall spoke about testing at Google at a SyncNorwich last autumn. He was a big crowd puller then and a sensational speaker. People said then and said again tonight that he is clearly passionate about about what he does and makes a traditionally boring subject into something very exciting. Dan has refined his presentation into two 30 minute halves. It was even more engaging and I think the format works well. I’m looking forward to having him speak again at the Naked Element Ltd. testing conference in November.

I’m already looking forward to the next SyncIpswich. 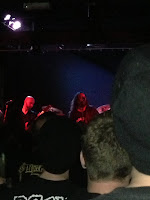 I’ve had even less luck seeing Deicide than Devin Townsend up to now. A couple of years ago they were meant to be playing up North, so I bought, a ticket booked a hotel and then the tour got cancelled because they decided to trash their tour bus on the first night of the tour. Then they were meant to be playing at Bloodstock, but their performance there got cancelled. So when Deicide booked a gig at the Waterfront in Norwich I was very excited (everyone in the office will testify to that!). Of course those in the know (Andrew Martyn) were taunting me that it was only the start of the countdown to cancellation.

With three support bands it was always going to start early. The doors opened at 7pm and I joined the queue outside the Waterfront as normal, only to discover that the long queue was for the band playing downstairs (Cancer Bats). So I got straight in and straight upstairs to where Sweetest Delivery were already playing. They were good but a bit all over the place. You don’t often see keyboards so prominently in a death metal band, but it worked really well.

Next up was Destinity, a french technical death metal band. If Slipknot did death metal, this is how I would imagine they would sound with a combination of strong clean vocals and death metal growls. Others I spoke to thought they were boring. I liked them enough to buy a CD and it’s very good.

Then came Karnak, a morbid angel like death metal band from Brazil. Very heavy. Very good. Bought a CD and it’s just as intense as their live performance.

It was clear when Deicide hit the stage at 9.40pm that we weren’t going to get the full set from even the previous night in France.It was also strange that on the tour to promote the To Hell with God album that they didn’t play the title track. However they did play a blinding set that was well worth the wait. I’ve complained about the PA at the Waterfront before and it didn’t do Deicide any favours tonight, but you could still tell they were playing well. The twin (bald) guitarists just oozed class all the way through the performance and Glen Benton was just how I expected him to be.

Posted by Paul Grenyer at 08:54 No comments: 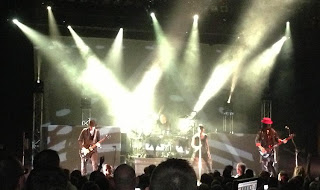 The last time I saw Skunk Anansie at the UEA in Norwich, on the Wonderlustre tour, they were amazing. Wonderlustre was weak, but the band was fantastic as the songs were much heavier live. This time around, even though the new album Black Traffic was only 35 minutes it was a solid 35 minutes. The songs still translated to live well, but there was too much bass throughout the show which rather spoiled the sound. I still enjoyed it, but there weren’t enough songs I knew. Skin of course put on a superb performance. Charisma oozing out into the audience. Unfortunately the UEA was at around half capacity. I suspect a few people balked at paying £24 for a ticket. We nearly did.

The support band, Your Army were also very good. Other than Enochian Theory supporting Threshold two weeks ago, I haven’t enjoyed a support band so much for a long time! They weren’t enough of my sort of thing to buy their album, but I enjoyed them while they were on.
Posted by Paul Grenyer at 08:22 No comments: 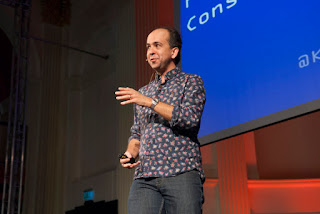 SyncConf, Norwich’s first Agile & Tech conference, presented by SyncNorwich on Friday February 15th 2013 at the Open Venue was a huge success! We had 160 people come for the day and 42 for the dinner in the evening at The Library Restaurant. The success of SyncConf speaks for itself with the numbers, press conference and reviews:

Of course SyncConf wouldn’t have been a success at all without our speakers, sponsors, venues or delegates and my thanks go to you all. SyncConf also helped me realise a dream I’ve had for a while of having Kevlin Henney open a conference in Norwich. Kevlin has been a friend of mine for quite a while and huge influence on my professional career. Thanks Kevlin! Without John Fagan, SyncConf would have been a much smaller and less sexy Agile only conference. My thanks also go to John for doing such a fantastic job helping me organise SyncConf.

The photos from SyncConf, taken by Andrew and his team from Platform Ticket are already available here: http://www.syncnorwich.com/photos/13161312/.

We’re currently waiting on InfoQ for the videos and hope they will be available soon.

Slides can be found on slideshare http://www.slideshare.net/SyncConf/

If you enjoyed SyncConf and haven’t already done so, please support SyncNorwich by going along to the website and joining: http://www.syncnorwich.com

After slow ticket sales and a change of venue to reduce the cost, the speakers dinner was a huge success and enjoyed by the 41 people who attended. Even after a long day at the conference, the dinner guests were still going strong at 11pm. We’ve had good feedback from people who enjoyed moving from table to table to speak to different speakers between courses. SyncConf would like to extend a massive thank you to The Library restaurant and it’s staff for a great evening.  We’re planning to return to The Library for next year’s speakers dinner.

The date for next years SyncConf is Friday February 28th 2014 and is likely to be at the Open Venue once more. Tickets will be on sale later in the year. Watch out for emails and tweets.

SyncConf would not be possible without our sponsors. I would like to extend my thanks to each of them:

It’s been nearly a month since SyncConf and this is the first opportunity I’ve had to stop and write about it. I was expecting to have loads of free time once the conference was over, but it hasn’t worked out that way and I’m deep into organising a mobile development conference for July of this year.

We’re very lucky to have yet another person from 10gen come to speak at our second meeting. I met Trisha Gee a few years ago when I was working in London. Trisha works on the Java driver for MongoDB.

Trisha is going to do a general question and answer session, so please come prepared with your questions. Trish has a broad spectrum of knowledge, which is not just limited to MongDB, including:


This promises to be a relaxed, fun and social evening. Please do come and join us. 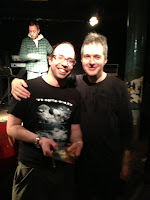 I haven’t been to the Underworld for a long time. I’m not even sure who the last band I saw there was. I have a feeling it may have been Deathstars. It’s a superb little venue with a great sound system and friendly staff!

First up tonight were Cryptex, an interesting band from Germany with a really quirky sense of humor. Next up were Enochian Theory, a superb progressive rock & metal band. I was really impressed and bought their latest album, which the singer / guitarist signed “Thanks Paul, keep it disco”.

Threshold are my favorite band, they have been since 2006 and I think they’re amazing. They did not disappoint tonight. With a set primarily from the new album, March of Progress the band played a blinder. I had to feel sorry for Pete Morton who was having technical difficulties which appeared at the beginning of Coda, the first song that he wrote for Threshold that they were playing live. Damian was of course on great form and had a real connection with the crowd. Let’s hope they get the UK tour they clearly want and that they come to Norwich.

Before the show I managed to get Johanne James’ signature on my copy of March of Progress and after the show I collected signatures from the rest of the band and got photos with Damian and Karl. I’ll admit it, I was a complete groupie. I’ve made no secret of the fact that I think Karl Groom is an even better guitar player than David Gilmour and I was thrilled to meet him tonight. It was also great to catch up with Pete Morten and to meet Grace finally in person after conversing on facebook. Damian was mobbed as usual after diving into the crowd, but I managed to get a signature on I Am Anonymous too.

Roll on Kingston in May!
Posted by Paul Grenyer at 13:38 No comments: