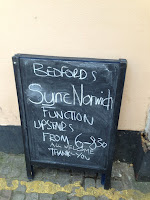 Last night was the first SyncNorwich that I have managed to get to this year and it was fantastic. There was a real buzz and the eagerly anticipated speakers did not disappoint. It was also good to catch with a lot of people from the early days of Validus.

First up was Richard Churchill of Service Tick. They’re doing some incredible stuff in the cloud with NoSQL databases. Richard was very engaging and is clearly bey passionate about what he is doing. Service Tick also boast one of the best DBAs I have ever worked with.

Next up was Ben Taylor from Validus talking about their migration of their claims handling system to the cloud. Ben is now Technology Director at Validus. I remember interviewing and hiring him for a Java developer role about 5 years ago. Lots of things have changed since then and Ben did a superb job tonight.

Unfortunately I had to leave early and missed Robin Meehan of Smart421’s presentation on big data in the AWS cloud. However I have heard from a number of people since that it was superb.
Posted by Paul Grenyer at 08:49 No comments:

Naked Element Ltd. is very proud to present MobDevCon the first mobile development conference in Norfolk. MobDevCon is a one day conference  and is open to all. There will be presentations and workshops covering a broad range of mobile development topics. Do you want to go mobile? Not sure which platform to use? Want to find out about NFC? Come join us on 3 July 2013 and find answers to your mobile questions at MobDevCon.

Posted by Paul Grenyer at 19:08 No comments:

At last! Proper sci-fi! Spaceships, aliens and everything!

I often think to myself when I go to see a Tom Cruise film that he’s never made a bad one. Then I remember War of the Worlds, but surely that has to be exception that proves the rule? Oblivion, despite some of the cliches and a few obvious twists, is a fantastic film once it gets going. There were a couple of places where I found myself wondering if something had been cut to get the 12A rating, which is always a shame. Having said that, the one piece of language at the end seemed totally unnecessary as it was absent from the rest of the film.

So I guessed pretty early on that the Scavs were humans. It was obvious. However, once that was revealed a new intrigue was introduced and the suspense reasonably well maintained until the end where it was almost fully described. It would have been good to understand exactly what happened to Jack and Victoria after they entered the alien ship and how the invasion happened and who the aliens really were, where they came from and why they were stealing energy from planets.

One of the highlights for me was when Jack flicked through his record collection and there was a copy of Pink Floyd’s The Wall and Asia’s first album. You don’t see that every day!
Posted by Paul Grenyer at 08:35 No comments: 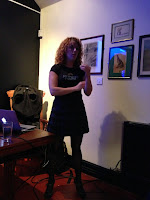