An Introduction to the WPF with the MVVM - Part 2 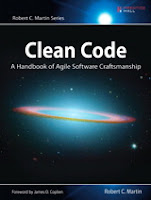 I knew this was going to be an excellent book from the moment I heard Uncle Bob describing his ideas of Clean Code at his key note at an ACCU conference. I bought the book there and then, but didn't start reading it until a couple of years later. More recently I got it signed by Uncle Bob at Skillsmatter. After just a few pages it propelled itself into my top three books every programmer should read (behind Kent Beck's Test Driven Development and The Pragmatic Programmer by Andy Hunt & David Thomas) and at the end it's still there.

The chapter on comments is worth the price of the book alone. I have worked in places over the last few years, where comments have been encouraged to explain the code, rather than writing code that explains itself. Another great chapter is the one on functions and the advice to keep them small is especially good and compelling. As I look back over the table of contents now, every chapter that describes how to improve an aspect of code is an absolute mine of good advice.

The final few chapters contain a number of refactorings. One on an application from the ground up and the others on existing code written by other people. This is the only place where the book got gratuitous and I must admit I skipped most of the final refactoring.

The final chapter is a summary of the advice given in the rest of the book and something I will find myself referring to again and again.

If you've read Test Driven Development and The Pragmatic Programmer, make sure you read Clean Code next.
Posted by Paul Grenyer at 12:25 No comments:

Our House Is For Sale (Again)

See this property on rightmove.co.uk
Posted by Paul Grenyer at 13:12 No comments: