Lacuna Coil are one of those bands where I've bought every album only to discover I only really like one of them in it entirety and then odd tracks here and there. The album I like is In a Reverie and the odd tracks I like most are Swamped and Heaven's a Lie from Comalies. Comalies, and indeed Unleashed Memories are good albums, but I get board very quickly and there's nothing to keep my attention. The much anticipated Karamcode was simply rubbish and therefore I didn't play it more than a couple of times.

I've seen Lacuna Coil live three times and every time they were disappointing with little stage presence. They certainly couldn't compete with their genre counterparts Nightwish.

Today I heard the track Spellbound, from the new album on thier MySpace page. Although it's only three and a bit minutes long it gives me hope for the new album, Shallow Life, out in April.
Posted by Paul Grenyer at 08:58 No comments:

Readers of this blog could be forgiven for thinking I mostly use it to whinge about poor customer service, but it's happened again.

Charlotte and I went out for Valentines day last night. I'd booked us a table at Sweet Chilli in Norwich. When we got there we discovered that they were only doing set menus at a minimum of £25 a head. This wasn't mentioned when I booked.

Neither Charlotte or I wanted to eat a starter, main and desert, let alone pay over £50 for a meal we couldn't choose. So shortly after our drinks arrived we got up and walked out. I explained the situation and exactly why we were leaving and asked to pay for the drinks, but unsurprisingly I didn't have to pay.

Amazingly we managed to get a table at old faithful, Pizza Express just across the road and we only had to wait about twenty minutes. We couldn't get the table we wanted, but the service was excellent and the food as good as ever.

After a few drinks in the Marquee we had a great night.
Posted by Paul Grenyer at 09:16 No comments:

Last night I finished reading Developing a Spring Framework MVC application step-by-step by Thomas Risberg, Rick Evans and Portia Tung. It's excellent. They develop a Spring application almost exactly the way I would with unit tests, separate integration tests that talk to a real database, an abstracted data access layer to allow substituting of mock objects and ant based deployment and manipulation of TomCat.

If you need to develop an MVC Spring application start with Developing a Spring Framework MVC application.
Posted by Paul Grenyer at 09:13 No comments:

My dad and I have been Mike and Mechanics fans since the Living Years and he's been nagging me for a long time to keep an eye out for them player. Alas it seems this is unlikely to happen again, so when Paul Carrack came to the Theatre Royal in Norwich we figured it was the closest we could get. I really didn't expect him to play any Mike and Mechanics songs, as he has his own extensive back catalogue, so we were pleasantly surprised to get Another Cup of Coffee, Cool Runnings, The Living Years and Over My Shoulder.

It was a strange gig. The first half was cut a little short and the band instructed to perform a different closer. Just before the second half it was announced that Mr Carrack was suffering from Influenza and expected his voice to go before the end of the set. We were offered the opportunity to leave and have a full refund from his personal pocket. No one left, Paul's voice did go, but everyone had a great time, especially his keyboard player who too over lead vocals a few times.

The thing is, we'll have to go and see him again now!
Posted by Paul Grenyer at 20:14 No comments:

I've been to a number of gigs in Birmingham, Vader at Edward No 8, Slipknot and Slayer (co-headline) at the National Indoor Arena and Rammstien and Motley Crew at the National Exhibition Centre. I've also spent a good number of new years, including the millennium, in Birmingham with friends. This was my first trip to the Carling Academy and it's a reasonable venue, with a reasonable sound system, but with a whole lot of unnecessarily rude and unfriendly people, a lot of who don't know how to use deodorant and have no respect for the smoking ban. This was not the Birmingham I know. I did however meet some very friendly scousers and a very chatty girl for Leicester who'd lost her friends, her purse and her Nintendo DS!

Unfortunately we missed Five Finger Death Punch, the band I had been looking forward to the most, as we didn't get there in time. I'll be looking out for them touring the UK in the future. Unearth were as expected, not very good.

I felt rather sorry for Dimmu Borgir. This was meant to be a co-headlining with Lamb of God, but Dimmu got a substandard sound check and although they played very well, the sound was dreadful, bar the final two songs. The days when Dimmu Borgir were pretty much my favorite are long gone and I find that even the Black Metal of Emperor and vintage Cradle of Filth no longer hold my attention. Having said that they were good, just like at Bloodstock in the summer.

Just when I'd pretty much decided the reason Dimmu Borgir sounded so bad was due to the PA, Lamb of God came on with an incredible sound. Very sharp and very clear. They play exceptionally well and are a very tight band. Once we'd moved far enough back to not et knocked into every 2 minutes, I thoroughly enjoyed every song. I would travel half way across the country to see them again, but they'd be a welcome Bloodstock headliner in the future. They did the usual stuff about keeping the metal faith and played a number of new songs, all of which sound superb.

The sound man should not go without a mention. I've never seen someone so keen to get the bands to run to time.
Posted by Paul Grenyer at 20:05 No comments:

The Road to Recovery 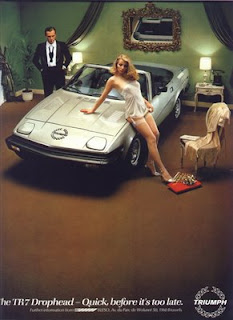 The first step is often the smallest. Yesterday I jacked the front end of my TR up on to axle stands and took the offside front wheel off and sent it off to have the puncture (or it may be a bad seal on the alloys) repaired. It's been a problem pretty much since I've had the car and it's time it was sorted for good. Once I have four functioning tyres I'm ready for the next step: MOT.

As I have no insurance, the garage have kindly said they'll come and pick the car up, MOT it and drop it back to me. It also needs at least an oil and filter change, and probably a new set of plugs and a water change. I'm going to do those myself this time.

My aim is to have the car back on the road at the beginning of May and use it in the six months through to October. That way I only have to tax and insure if for six months, which will be a lot cheaper than the usual twelve, during most of which I'm usually not driving the car.

I'm soon going to have to face the fact that the bodywork, although better than most of the TR7s of it's age, needs some work and the seats need replacing. What I really needs is the time, space and money for a complete strip down and rebuild. And of course if I do that, I'm going to want to fit at least a 4.6 V8, power steering and rear disk brakes. Maybe when the kids have left home....

The only light at the end of the tunnel, as far as the bodywork is concerned, is that a friend of my wife's can do it for me cheap, but without a strip down it's only going to be patching up at best and I still have to find the money.
Posted by Paul Grenyer at 10:15 No comments:

My Boiler Plating Database Resource Cleanup in Java presentation has been confirmed for ACCU London at Skills Matter on Thursday 19th February 2009. It starts at 6.30pm and you can register here: http://skillsmatter.com/event/java-jee/accu-february
Posted by Paul Grenyer at 20:23 No comments: