First up were New Device, a very good young rock band. Good vibe, good sound and tight musicians. Very enjoyable to watch, I won't be buying any if their CDs though.

Gun, to my surprise had the ex-little angel Toby Jepson singing for them. A deeper voice than the original singer, but still very good. They opened with don't say it's over, which is one of my favourite songs. About halfway through the show was stopped by Toby as someone was starting a fight. He demanded they were thrown out as there was no place for that behaviour at a Gun gig. Inside, outside of love included a cover of the Police's So Only. All the way through, Gun made it clear that Les Paul guitars were made for Rock bands like this. They finished with Steel Your Fire and Shame on you. And Encored, of course, with a superb Word Up, the place erupted.
Posted by Paul Grenyer at 19:33 No comments:

Threshold at the Garage 2009

Pythia, a fairly good female fronted metal band, were up first. The matching tshirts were a bit much , as was the shrill, slightly irritating singer. Overall I quite liked them, but not enough to be persuaded to buy their CD from the merchandise stand.

Serenity, who were up next, completely blew me away. An absolutely superb prog/power metal band. They were heavy in places along with great ballads and an exceptionally strong signer. They did persuade me to part with money for both of their CDs!

Threshold are always superb. Plain and simple. They played lots of old stuff as well as some new stuff. I loved it all. The guitar sound wasn't mixed properly in critical mass, which was a shame, and I had to leave early to get a tube. I only missed Mission Profile, Pilot in the Sky of Dreams and Slipstream, but given that they are three of their best songs, I did miss out.
Posted by Paul Grenyer at 19:31 No comments:

Stranger in a Strange Land 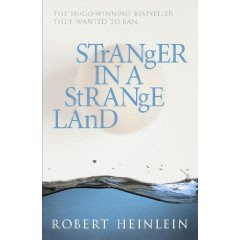 This book lacks much real science fiction. At most it's a fantasy book. What it really is is a dig at society and religion and that, unfortunately, stifles a story that actually isn't there. Many science fiction books make these points as well, but that doesn't make this science fiction. If this was a relatively new book I'd say it's all been done before, but given its age, all I can say is that it's all been done again since and better. If I was reading it in the 1950s or when I was a teenage boy, I'm sure I would have loved it.

One ray of light in an otherwise dull read was one of the main characters, Jubal. The story is very much told through his, very sensible, view on the world. He understands everything perfectly, has seen it all before and is never fazed by anything. While everyone else is giving into their prejudices and preconceptions he is watching and making sense of it all.

The ending was probably the worst part. The main character is murdered for the good of the people, his followers rejoice and then he visits Jubal from beyond the grave. Time for some more Alistair Reynolds I think.
Posted by Paul Grenyer at 19:47 No comments: