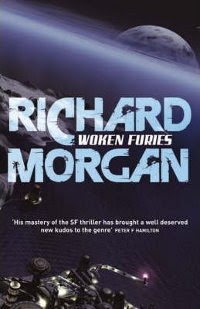 I have read all of Richard Morgan's books in this series up to Woken Furies and this is the best yet. The characters are deeper and more intricate. The plot twists and turns and bubbles with the unexpected. There is more of everything that Richard Morgan does best. There is the odd slow patch as the pace is moderated towards the middle, but it soon picks up again. There are all sorts of questions that materialise throughout the book, some of which are not answered until the end. It takes some following, but is well worth it! I can't wait to read the next one.
Posted by Paul Grenyer at 16:57 No comments:

Soon after I discovered unit testing I accidental discovered integration testing. I was writing a system that interacted with a database at just about every stage. So each of my tests would start by creating and populating the database. Then the tests would be run and afterwards the database would be torn down. Creating and destroying the database for each test ensured that it was always in a known state. It also meant that every test took a very long time to run. When I only had a handful of tests this was not too much of a problem. Once I had in-excess of a hundred tests it was a big problem! A general rule is that tests should take close to zero time to run, or people stop running them.

Most of the time taken up in setting up and tearing down a database is in its creation and deletion. The actual insertion, update, reading and deletion of data is relativity quick. Most databases support transactions. Transactions prevent a unit of work from being committed to the database until it is completed successfully. If an error occurs part way through the unit of work the transaction can be rolled back and none of the work carried out is committed. If the unit of work is successful it is committed to the database in its entirety once complete.

Once I discovered this I moved the creation of the database structure (the database itself, tables, views, stored procedures, reference data, etc) to my build script and started running my tests in transactions. This greatly improved the performance of my integration tests.