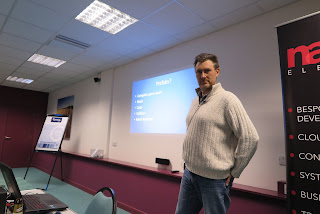 Norfolk Developers are trying a number of meetups outside of Norwich. Come along and find out more about NorDev at our first West Norfolk meetup!

So we can send a spaceship 4.6 billion kilometres to rendezvous with something that's only a few kilometres big, but we still can't strip spaces from telephone numbers. In a world where computers can beat humans at Go there are still some fundamentals we can't seem to get right. In this talk we're going to look at a few of these and ask "why are they so hard?"

Dom Davis is a veteran of The City and a casualty of The Financial Crisis. Not content with bringing the world to its knees he then went off to help break the internet before winding up in Norfolk where he messes about doing development and devops. Dom has been writing code since his childhood, sometime in the last millennium – he hopes some day to become good at it.

With the arrival of the first consumer virtual reality headsets the world of computer interaction and gaming is experiencing large changes in the way that we handle the Human/Computer Interface. Old rules get thrown away, new rules are discovered. The world has suddenly changed.

What are the challenges we face as we move from a world of the flat screen into the world of immersive virtual reality?

Richard has been a self-confessed computer geek for over 30 years and has been obsessed with gaming for as long as he can remember. He designed and sold his first computer game “The Key of Asmar” at the tender age of 14 and after mostly gaming his way through a Physics degree, he was seduced by the Dark Side and entered the heady world of business software, whereupon he built his own successful software company and designed one of the world’s leading email software suites.

Despite this exciting career in internet communication software, he always wanted to create computer games again. So in 2008 he decided to do just that, and thus Freekstorm was born.

When he is not polishing his alter-ego, the dastardly Doctor Kvorak, our resident genius likes to play games and make short indie films, largely because he’s a big kid at heart.

Posted by Paul Grenyer at 07:00 No comments: 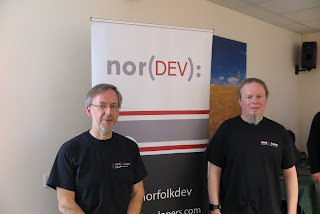 Everyone knows the monthly Norfolk Developer meets attract speakers from around the country to talk tech to us, but we were reminded recently that we also have a more practical function. To bring like-minded programmers together. One such successful collaboration began in March last year between John Heaser of Responsive Systems and freelance mobile developer Neil Sedger. The conversation they had resulted in a wildlife tracking app, which has recently been published on the Apple App Store and Google Play.
John posted in the NorDev Meet-up group that he was looking for help with a Cordova phone app and then decided to attend a meet-up himself. “I went along to my first NorDev meeting on 25th March 2015 and during the pre-meeting beer I overheard Neil talking about Cordova – so I asked him if he was interested in working on the project and he said yes, he had some time available, so I was very lucky! There are five of us working at Responsive Systems and whilst we have good skills in some areas we can’t be experts in everything! Neil helped us get started on the project – he is a nice chap to work with.”
“I’ve used Cordova on a few projects now” says Neil “It’s great for quickly building a cross-platform mobile app, especially if you already have a responsive browser-side web front end. It’s not for every project but it’s worth considering.”
Neil describes the app as a wildlife database with an built-in questionnaire to help users identify a creature they have found. “ ‘Dragon Finder’, has been built for the wildlife charity Froglife who are dedicated to the conservation of amphibians, reptiles, and their habitats. Users are encouraged to report sightings of creatures which can include location, habitat description and photos; this is uploaded to Froglife’s central database which they use to monitor populations, spread of disease and non-native species, and feed into other conservation projects.”
“We have brought in outside help on previous projects” says John “and I believe that co-operative skill sharing between small software businesses will play a key role in making Norwich a centre of technical excellence and that NorDev can facilitate this.”
Check out the finished app here:
Android: https://play.google.com/store/apps/details?id=org.froglife.dragonfinder
Apple: https://itunes.apple.com/gb/app/dragon-finder/id1051344492?mt=8
Posted by Lenore at 20:36 No comments: 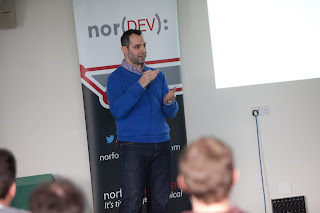 Cross platform mobile development with the power of Xamarin

Are you a .NET developer? Do you develop for mobile platforms or would you like to get started but you don’t know how or where? Then you should join Christos Matskas as he shows you how to get off the ground with mobile application development using the power of Xamarin and explains how to build powerful, full-featured, native applications that can run across all platforms. You will learn how to speed up your development cycle, reduce overhead costs and create “the one codebase to rule them all”.

Microsoft Azure is Microsoft's application platform for the public cloud. With over 60 service to choose from, Microsoft's open source cloud platform is enabling developers and companies to develop solutions that can run faster, scale better and work more reliably than ever. With full support for all major languages and easy to use SDKs, Azure is the best platform for mobile, desktop and cloud-based application. Join Christos in this session for a guided tour around the platform and find out how to leverage the different services to create powerful and reliable applications.

Christos Matskas has been working as a software developer for the last 12 years. He is an entrepreneur, founder and CEO of SoftwareLounge, a software consultancy firm. His portfolio includes collaborations with some great companies such as MarkIT, Lockheed Martin and Barclays. Over the years he has worked on numerous exciting projects from mobile applications to data crunching back-end solutions. He writes about his adventures in software development on his blog https://cmatskas.com. Christos is an advocate of Open Source Software and a regular contributor to numerous projects. He’s passionate about public speaking and he regularly speaks at conferences and user groups about .NET, the Cloud, mobile applications and software development in general (.NETFringe, DevWeek, MDevCon, SwanseaCon, Software Architect).
Posted by Paul Grenyer at 07:10 No comments:

There's Something About Europe 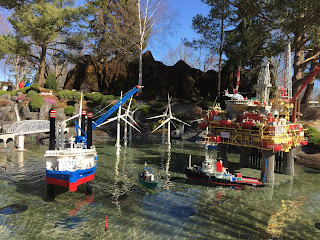 I'm sitting writing this in the Legoland Hotel in Billund, Denmark after a full day in the Legoland park with my wife and all three of my boys (4, 5 & 13). The park is closed and it's a few hours before our flight.

If you're thinking to yourself, Paul don't you know there's a Legoland in England just outside of London, then you wouldn't be the first. We've been there and it was ok, but it's not as good as the real thing and wouldn't have given us the opportunity to take the younger two on a plane for the first time and to a different country (which isn't Wales). Of course there are other ways to achieve this, but as we learnt when we took our eldest to Munich a few years ago, city breaks and kids often don't mix.

There are two main reasons that Legoland in Denmark is better. Everyone, without exception who works in the park and the hotel, has been friendly and enthusiastic - everyone. They've all played with our kids and there isn't the reserved, arms length approach we see generally in the UK. Our kids have been gently teased and even occasionally prodded with a rubber sword.

The attractions are excellent and better than the equivalents at the UK park. Our kids have never been so engaged and we've never spent so long in a theme park as we did in Legoland, Denmark.

It got me thinking, this has nothing to do with Legoland. I think it might be a European thing. I've spent time in France, Germany and now Denmark over the last ten years and it just feels better. Three western European countries in ten years is hardly a comprehensive survey, but my gut feeling is that I'd find other western European countries much the same. Of course I haven't been engaged as an observer in the local politics, as I am in the UK. Maybe Europe is how it's meant to be and our cold, unfriendly, British reservedness and lacklustre approach to good customer service is what's letting us down. Even more so in Norfolk.

I'm more relaxed when I'm in Europe and could really see myself moving to somewhere like Munich to live when the kids are older, maybe even left home. Usually when we visit a theme park in the UK it's a long way from home and knowing there's long drive when we finish and shattered kids to put to bed when we get there knocks all the enjoyment out. Tonight we only needed to go the the airport and then straight into the Premier Inn at Stansted when we land.

One thing I am sure of is that I want to spend more time in Europe, both for work and pleasure. The ideal, for me, would be to achieve both at the same time.
Posted by Paul Grenyer at 14:26 No comments: