This was this first Software East presentation I have attended. It was hosted at the Redgate offices just off the A14. They were very nice, if not as technologically advanced as Morgan Stanley. It just so happened that Allen Kelly, the speaker, was arriving as I phoned him from the car park, so we wondered in together to find no receptionist and a sign directing us to the Seagull Suite on the first floor. From the first floor there was no indication of where the Seagull Suite was, so Allan gave Mark Dalgarno, the event organiser a call and he showed us to the suite via the “SQL Servery”, Red Gate's appropriately named cafeteria.

The presentation was scheduled to take place between 6.30pm and 8.30pm. Two hours is a long time for these events, even though I can imagine Allan speaking for two hours without a problem. I found out that the first half hour is for networking and buffet eating, so I tucked in and chatted to Allan and Pete Goodliffe.

Allan spoke about setting up your own business. He believes that it's as easy as falling of a log and it is! He pointed out that all you need to do is pay an accountant and they set it up and do all the legal and financial stuff for you. I know this to be true as I have done it.

Allan's main thrust though was that there needs to be at least two of you, a techie and a salesman. That way you may just make it to through your first year. Again, the same thing had occurred to me. Whenever I have thought of setting up my business and going it alone I've always had two problems, I'm no good at selling and I don't have an idea for a product. A salesman wouldn't necessarily have an idea for a product, but they should be able to sell!

Allan went on to explain how he missed out on making a billion dollars by not developing an idea for a product he had early in his career that someone else later did. I did have some sympathy, but mostly envy.

Allan over ran and after questions at the end he finished about 8.30pm. The most significant question asked from my point of view was where do us techies find a salesman and, unfortunately, no one really had an answer.

The rest of the group stayed to polish off the buffet and do some more networking while I sloped off for the drive back to Norwich.

Allan's slides are available here: http://allankelly.blogspot.com/2010/05/falling-off-log-slides-online.html.
Posted by Paul Grenyer at 20:52 No comments: 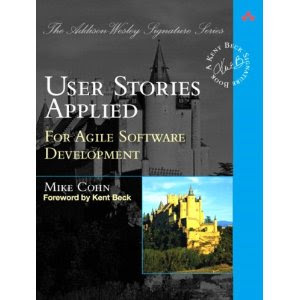 Only about half the book is actually about writing user stories. The other sections cover things like planning and testing. There is also some discussion about identifying roles within a system which, on the first read, felt a bit thin. Then when the case study came at the end and I had had chance to think about user roles in my own context I started see how useful defining them could be.

As you would expect, user stories are talked about in a reasonable amount of depth and most of the advice seems good to me. One of the main points I liked was the clear explanation of how user stories differ from tradition requirements capture and upfront design.

Mike Cohn asks questions at the end of each chapter. At the end of the book there are two appendices. One giving an introduction to XP and the other the answers to the questions.

Overall User Stories Applied is a little bit killer, but mostly filler.
Posted by Paul Grenyer at 19:21 No comments: