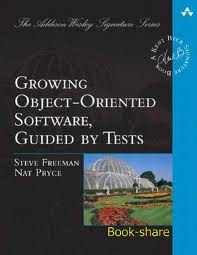 I'll cut straight to the chase: This is a great book! In fact I'd put it second, behind Test Driven Development by Kent Beck, on my must read list for developers. Testing is so important and while Unit Testing is becoming mainstream, many are failing to take the next next few steps to integration and system (end-to-end) testing. This book tells you why you should and shows, with practical examples, how to get started.

Growing Object Orientated Software Guided by Tests was the first place I read about the Walking Skeleton. Originally described by Alistair Cockburn, this is a technique I've been using for the last few years and didn't realise there was a name for. The Auction sniper example that covered by the middle chapters introduces not only testing techniques, but lots of useful and practical lessons about good design. The later chapters discuss improving your tests, including readability. The final two chapters cover testing threaded code and asynchronous code. Some of the ideas presented here were new to me and would have have been very useful refactoring exercises for some projects I used to work on.

If you want to develop higher quality, robust software, read and apply the lessons in the book.

Warning: The code examples in the Kindle version of this book are difficult to read and there are a few misprints compared to the paper version.
Posted by Paul Grenyer at 21:04 No comments:

Today is a dark day. My pride and joy is forsale:

The car is in generally good condition but has a few quirks and some surface rust as one would expect from a car of this age. The worst rust is shown in one of the photos. The drivers seat is in poor condition (see photo) but there is a spare driver’s and passenger’s seat to go with the car. The high speed setting for the wipers does not work but there is a replacement wiper motor included. The indicated mileage is 8950 which is believed to be the mileage since the V8 conversion, but this cannot be confirmed. The car is perfectly driveable but could do with some TLC.

The TR7 is a very underrated British sports car. With the original 2.0 Litre engine the performance was unimpressive but the torque of the V8 engine really brings the TR7 alive with the modified suspension and braking system matching the increased performance. This is a real opportunity to obtain a classic high performance convertible at a budget price.

Inspection welcomed and a test drive can be arranged with proof of insurance cover.

The car has been advertised elsewhere and therefore may be withdrawn before the end of the auction.
Posted by Paul Grenyer at 09:00 No comments:

Call for speakers: http://www.agilecambridge.net/ac2011/speak.php
Posted by Paul Grenyer at 08:46 No comments:

We all know Kevlin Henney from his technical writings, so I was keen to see what sort of fiction he might write. Before I read it, and even now, I had no idea of what the guidelines set for this short story were, but I was hoping for some science fiction. There wasn’t any, but it was still good.

The subject matter of Afterglow is a little on the dark side and like so many good stories, I had to read it a couple of times to really understand what it was about, who the person telling the story was and what situation they found themselves in now. Along with all the obvious emotion and feeling there is still a slight technical edge in certain places.

Personally I’m looking forward to the next, hopefully longer, piece.
Posted by Paul Grenyer at 11:11 1 comment: