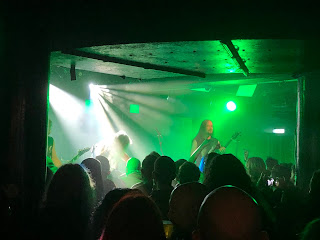 Something my first proper girlfriend said to me has stuck with me my entire life as I disagree with it (mostly).  She said that the best way to discover a new band was to see them live first. The reason I disagree is because I get most pleasure from knowing the music I am listening to live - most of the time.

I’m a member of the Bloodstock Rock Society and their Facebook page is often a place of band discussion. Lots of people there were saying how good Insomnium are, but they didn’t do a great deal for me when I listened to them on Spotify. Then it was early 2020, I hadn’t been to a gig since Shakespears Sister in November, I fancied a night out and Insomnium were playing in Norwich. So I took a chance….

From the off they were great live and I really enjoyed it. I came to the conclusion that I must like some of their older stuff as it was the new album which hadn’t done much for me. There were lots of things I like, like widdly guitars, metal riffs and blast beats, but what really lets Insomnium down is the vocals. Death metal vocals, to a certain extent, are death metal vocals, but this guy sounded like he was singing a different song in a different band - it’s the same on the album I tried. If the vocals were more suited to the music, like there are with Wintersun, it would be even better. I also learned that Norwich City’s current start player is from the same town in Finland as the band.

The first thing I did this morning was look up which albums the setlist was from an make a list:


And then die a little inside at the prices on Amazon and eBay. I think I’ll be playing a lot of Insomnium on Spotify for the time being so I’m ready to enjoy them to the full next time.

Posted by Paul Grenyer at 10:32 No comments: