BDD is a technique for helping team members collaborate and discover requirements in their project. It uses examples to illustrate the intended behavior of systems before they're implemented, so that the team can discover more examples and develop a shared understanding of the requirements. In this talk Liz will show why conversations are the most important aspect of BDD, how examples can help you discover things early, and why discovery is an inevitable part of software development.

Liz is an experienced Lean and Agile coach, trainer, blogger and well-known international speaker. Coming from a strong technical background, her work covers a wide variety of topics, from software development and architecture to psychology and systems thinking. She is best known for her involvement in the BDD community, and was awarded the Gordon Pask award in 2010 for deepening existing ideas in the space and "coming up with some pretty crazy ones of her own".

Last night Charlotte and I took Jude (8) to see Battleship. Although Jude enjoyed it immensely, we thought it was rubbish! Hollywood are making the same alien invasion movies over and over again. The best thing about this film was that AC/DC featured twice in the sound track.

There are a few positive things I can say about it. There was a lot of Peter F. Hamilton style sci-fi with the suits the aliens wear and the ships they fly. The film was much better than the remake of War of the Worlds that it was clearly heavily influenced by. Rihanna’s character was really strong and very convincing. Liam Neeson was, as usual, excellent, but if I were him I would be disappointed and slightly embarrassed with the rest of the film. Robroy it wasn’t.

That’s where the positives end. There was cliche after cliche, the worst being two of the main characters coming to blows near the start of the film and then saving the world together and telling each other what an honour it was at the end. There was a clear Battlestar Galactica influence with the battleship that had been turned into a museum saving the day towards the end. There was even a fighter pilot with the callsign “Boomer”. All a bit obvious really. And the idea of old sailors sailing the battleship into battle at that end and getting an old steam ship started in no time at all was just too far fetched.

Save your money.
Posted by Paul Grenyer at 06:58 2 comments:

I’ll cut to the chase. I didn’t enjoy this book. It wasn’t anything like as bad as Market Forces, but not as good as other people I’ve spoken too have said they thought it was. Black Man actually began really well. When the ship crashed and details of the crimes of the killer became apparent I actually got quite excited. Then there was the really, really lengthy character building followed by the rather implausible wild goose chase. There is some mystery until about 75% of the way through the book. The revelation is disappointing and what is basically one long revenge story spawn another mini and rather predictable revenge story at the end. Of course there is always the chance that I’ve missed something vital, but I suspect this book was just not for me. It’s a predictable thing to say, but I think we need Kovacs back. Currently I’m not inclined to try the two Richard Morgan books I’ve yet to read.
Posted by Paul Grenyer at 21:28 1 comment:

The Skeleton Just Keeps on Walking

Last night I gave the Walking Skeleton presentation to Norwich Developers Community at the Ribs of Beef in Norwich. As you can see from the photo it drew quite a small, but focused crowd. Most had at least a basic working knowledge of development and I was able to rattle through 90 minutes of material in the required 60 minutes. Everyone was engaged and I had some good participation and excellent feedback.
Posted by Paul Grenyer at 08:15 No comments:

Last Thursday I gave my Walking Skeleton presentation to the department I’m working in at my client’s client. Rather than a room of developers, I had a room full of designers and managers, but with a good amount of development experience. About half of them had written a line of code in the previous twelve months and all bar one had written a line of code at some point in their career. They were all keen to learn and to interact and this meant the material stretched out a little beyond the allotted 90 minutes. Next Tuesday I have an hour to give the same presentation to a group of experienced developers. It will be interesting to see if a different audience allows me to move that much faster.
Posted by Paul Grenyer at 09:59 No comments:

The Walking Skeleton Comes To Norwich

What: The Walking Skeleton
Where: Ribs of Beef, Norwich
When: Tuesday 10th April 2011, 6.00pm
For: Norwich Developers Community.

I will be speaking about Alistair Cockburn’s Walking Skeleton at the Ribs of Beef in Norwich on Tuesday 10th April 2012 at 6.00pm for the Norwich Developers Community:

The walking skeleton was described by Alistair Cockburn as "... a tiny implementation of the system that performs a small end-to-end function. It need not use the final architecture, but it should link together the main architectural components. The architecture and the functionality can then evolve in parallel." It is also one of the theme's in Freeman & Pryce's Growing Object Orientated Software Guided by Tests.

In this session Paul will start with an (almost) clean IDE and develop a walking skeleton for a simple application and demonstrate how Test Driven Development (TDD) can be used even at the system level to test features.

Paul has been programming in one form or another for over 20 years and has been involved in building agile teams since 2007. After several years of C++ and a very happy period using Java, Paul is now designing solutions for a large insurance company.

When he's not programming or chasing his 3 children, Paul thoroughly enjoys science fiction, heavy metal and cycling.
Posted by Paul Grenyer at 18:00 3 comments:

Monday 26th March was the date for the fourth Agile East Anglia meeting. It followed two well attended pub meets and an over subscribed presentation on Agile User Stories from Rachel Davies. Once again the venue was the Assembly House in Norwich, where Allan Kelly presented his Dialogue Sheets to a full house. The meeting attracted a far more diverse crowd this time with more companies represented and a number of people coming from Ipswich, including Vaughan Clarke from Ifftner who wrote this review:

Our next event is on Behavior Driven Development (BDD) and is on 7th June. Agile East Anglia will soon be changing both its regular venue and it’s name in order to appeal, not just to the local Agile community but to the wider software community within Norwich and the surrounding area.

Watch this space. There are exciting times ahead!
Posted by Paul Grenyer at 22:38 3 comments: 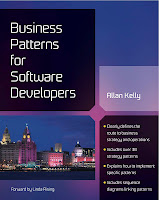 Nat Pryce, one of the authors of Growing Object Oriented Software Guided by Tests, is quoted as saying that pattern books generally have two sections. First is there is a highly interesting preamble, then come the patterns. Allan Kelly has certainly written a patterns book in the traditional two parts, the difference is that both parts are very interesting indeed. The description of software company lifecycles was both informative and sensational to read and is by far my favorite part of the book.

I had genuine trouble putting the book down. Gone is the often dry pattern descriptions common among other patterns authors. What give this book the edge for me is that I’m learning about something other than software and I am easily able to relate the patterns to my own experiences. This is the first time I’ve really understood what a pattern language is and, like all good patterns books, it taught me names for, and gave me a greater understanding of the patterns I see around me. It helped me understand the forces and the solutions in greater detail.
Posted by Paul Grenyer at 09:59 No comments: