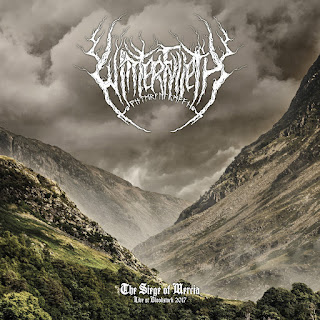 At school I had this friend, Jamie, and he once said to me that he always preferred having a band’s live album to their studio album of the same songs. His example was Queen’s Live Magic. To me, then, this was madness. It didn’t have all the same songs as It’s a Kind of Magic and the production isn’t as good. Let’s face it, unless it’s Pink Floyd, the production of a live album is never as good as in the studio. I avoided live albums for years.

Pink Floyd’s Pulse was the first live album I really got into and then there was nothing until the teenies when live albums from Emperor, Immortal, Arch Enemy, Dimmu Borgir and Blind Guardian got me completely hooked.

The latest live album I’ve bought is ‘The Siege Of Mercia: Live At Bloodstock 2017’ by Winterfylleth. It’s amazing for a number of reasons. I was at Bloodstock, watching the band, when it was recorded. It’s a fantastic performance of of some brilliant songs. It’s got a, atmospheric, synth version of an old track at the end. It’s encouraged me to relisten to their studio albums and enjoy them so much more.

Winterfylleth are a Black Metal band from Manchester. Their lyrics are based around England’s rich culture and heritage.  Some of their album covers and songs depict the Peak District. You’d have thought a song about Mam Tour, a hill in the Peak District, might be a bit boring, but it’s not! Maybe because, being black metal, you can’t really hear the words, but as always the vocal style, heavy guitars and fast drums make for the perfect mix.

I currently have the Siege of Mercia, along with some similar new albums from the likes of Borknager, on my regular daily playlist and it just gets better and better.

Posted by Paul Grenyer at 15:34 No comments: