April nor(DEV): A.I. and Cognitive Computing with Watson & Keep Secure and Under the Radar 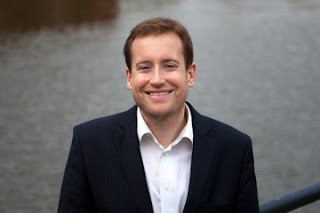 What:  A.I. and Cognitive Computing with Watson & Keep Secure and Under the Radar

Artificial Intelligence and Cognitive Computing have become the latest buzzwords in the industry, with companies big and small rushing to work out how they can take advantage of this emerging technology.

In this discussion, we’ll look at the myths behind the hype, how mature the technology is and how IBM’s Watson has evolved from game show winner to one of the market leaders.

Colin works for IBM as a Technical Leader, crossing all the IBM technologies and services. Prior to Big Blue, he worked in Aviva for over 14 years and has contributed to nor(DEV):con and Norfolk Developer Meetups.

He still lives in Norfolk and apart from plenty of travel working for some of the big blue chip companies, he tries to get out in South Norfolk running and cycling in a vain attempt to lose weight and keep fit.


Keep Secure and Under the Radar
David Higgins

Some basic and some not so basic steps to keep you and your business safe in the on-line business arena.

David is ex UK Gov contractor discusses simple steps you need to take to stay ahead of current data security legislation and keep yourself / your business secured.
Posted by Paul Grenyer at 19:36 No comments: 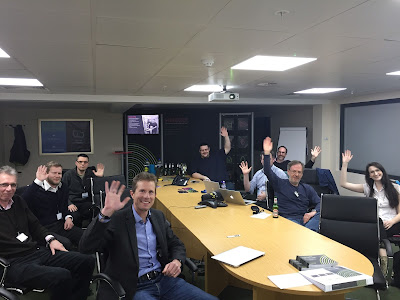 We love the MigSolv data centre out at Bowthorpe in Norwich. This was nor(DEV):’s second visit and they always make us very welcome. Walking into what feels like a massive Blakes 7 set and getting the tour,including the retina scanner and massive server hall, is incredible and seriously interesting (even though it’s my third time!).

The intimacy of the board room with the table down the centre and nor(DEV): members arranged each side is great for generating conversation! And when you have a humorous and huge personality like Mark Pryce-Maher it encourages the banter and the discussion even more! It’s safe to say this was one of the most interactive nor(DEV): evening presentations for some time. 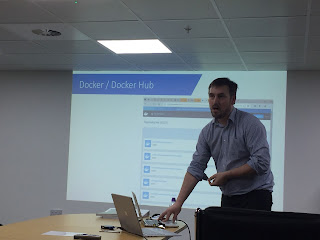 Mark was there to tell us about how you can run Microsoft SQL Server on Linux (or is that “Lynux”?). Anyone would think Mark had been on the WINE, but no, you really can run SQL Server natively on Linux now. The first question though, has to be “why?”. The answer is simple. Microsoft are going after geeks, Oracle users and Linux houses who only run Windows to run SQL server.

The second question is “how?”. Developers at Microsoft discovered that, despite the vast number of methods available from the Win32 API, there are only a small number of methods which actually talk to the operating system. These are for allocating memory, disc storage, etc. A project called Drawbridge was developed to identify these methods and port them to Linux. SQL Server can then make use of those methods to run on Linux. Simples!

Mark did a live demo of installing and connecting to SQL Server. Unfortunately he hadn’t made sufficient sacrifices to the demo gods and things didn’t go precisely to plan. SQL Server can be run on an Ubuntu instance on Microsoft’s Azure from about £1/day (I’m intending to try it on a Digital Ocean droplet which is slightly cheaper). It’s incredibly easy to install. You just add the necessary repositories to Ubuntu’s package manager and tell it to install SQL Server. There’s also a pre-made Docker image (if Docker is your thing) which is even quicker. 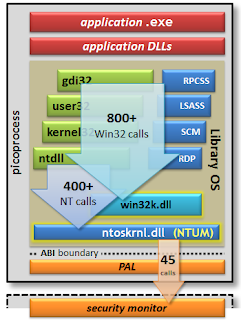 Microsoft have developed an open source version of the client tools called Microsoft Operations Studio . It is also very easy to install (I did it on my Linux Mint laptop over 4G while Mark was speaking), but for some reason during the demo it just wouldn’t connect to SQL Server. However, Mark talks a great talk and I’m sure with a little bit more playing it would have!

We enjoyed being at MigSolv and hearing from Mark! MigSolv would like us to go back and we’re keen to do so in the future.

The Next nor(DEV): is on 4th April and features “A.I. and Cognitive Computing with Watson” from Colin Mower of Microsoft and “Keep Secure and Under the Radar” from David Higgins. RSVP here: https://www.meetup.com/Norfolk-Developers-NorDev/events/242231165/

Posted by Paul Grenyer at 18:41 No comments: 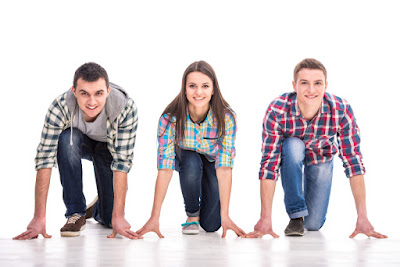 Seeing as it’s been National Apprenticeship Week this week, we thought we would shine a light on our apprentices, past and present. Naked Element would be a duller place without them and the valuable work they do!

We’ve had three apprentices in total, Lewis, Rain and Jack and they’ve all been invaluable to our business. Lewis spent his year-long software development apprenticeship with us, before staying on a while longer as a full-time employee. He headed User Story workshops, held meetings with clients and even managed to join in with some of the social sides of Naked Element too! Lewis got a lot out of his time with us, saying "an apprenticeship is a great way to get your foot in the door of an industry, gain some excellent skills and first-hand experience in a job you may want to turn into a career". Lewis decided to be an apprentice because he felt that a more hands-on approach to learning would suit him better than studying full time. At the time he hoped he would be working in the US in the near future, but he has since decided to settle down at university and is due to begin a Computer Science degree at the UEA later this year to bolster his industry experience with a formal qualification.

Rain joined us as an administrative apprentice for just over a year, keeping us organised and the company running smoothly. Rain was an asset to Naked Element, as a natural networker and often the first face to greet clients, she helped start the conversation about software and business. From the professional presentation in her initial interview to managing conferences, she impressed us all. She took her experience with Naked Element and became the executive PA to the CEO of Apple Helicopters!

Our current apprentice is Jack, who is part-way through his software apprenticeship. We’ve been so impressed with Jack that we’re hoping he will stay on after his course has finished to be a software developer full time! He’s a good problem solver, helping Naked Element deliver projects more cost effectively and equally enthusiastic at tech events when he represents the company.

Our CEO Paul says "I believe that apprentices are an excellent way for the predominantly small tech companies in the TechEast region to grow and a way to help fill the skills gap we have here. They are also a great way to support young people in our region to get industry experience." Naked Element has found all three apprentices invaluable to supporting and growing our business and we’re very proud of how far they’ve come!
Posted by Paul Grenyer at 07:39 No comments: