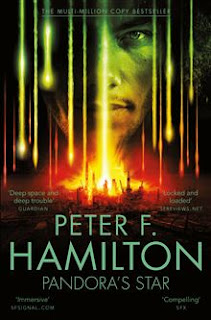 I haven’t posted a book review to my blog for a very long time. This is because I haven’t finished a book for a very long time!  Last night I finished Peter F. Hamilton’s Pandora’s Star, the first of the Commonwealth Saga. At 1151 pages it took me just over a year to read on my second attempt. I think the first attempt started a year earlier than that. I was struggling with it, but it was worth it.

Pandora’s star is a space opera of reasonably wide scope. I like books that force me to keep up to follow the interactions of the characters, often in separate plot lines that come together at the end. There’s plenty of that in Pandora’s Star. Some of the sub-plot lines used to build the characters felt a bit much and there are places where it’s a little ploddy and others, such as the flight of the Second Chance where more detail would have been good. I also didn’t get on with Ozzy or his storyline at all.

Overall it was a good read. I really liked some of the characters, like Paul Mayo. The end of the book is fast paced, exciting with a few unexpected twists. If it had been like that most of the way through I wouldn’t have been able to put it down. I’m already looking forward to Judas Unchained.
Posted by Paul Grenyer at 07:56 1 comment:

Want to learn to program? Come along to Norfolk Developers Two-Day Python Workshop for People New to Programming.

What: Two-Day Python Workshop for People New to Programming

Where: The King's Centre, King Street

This hands-on workshop is to enable people who are not programmers to get into the world of programming. These two days are just an initial foray, to give people the basic ideas and a taste of what it is like.

The course will introduce programming using Python to people who have little or no idea what programming is. This will be a version for adults of the sort of new computing material that will be being taught to primary and secondary school students starting next year.  The goal is to make sure people begin to understand the theory and practice of programming and computer science, but coming to it from a very practical viewpoint: theory emerges from practice.

There will be four sessions, each of three hours, each structured as a short introduction to a few topics, followed by a series of practical exercises to investigate the topics, and finishing with a short review/compare/contrast to consolidate the material of the session. The introductions will be part lecture part interactive demonstration – PDF files rather than paper will be provided for any overhead slides used in lecture mode. The series of practical exercises will be attenders, working in pairs, writing programs as directed by worksheets. The review session will a group discussion, and possibly live coding by the workshop leader, based around sample answers to the exercises.

In the spirit of being agile, although there is a programme set out for the four sessions, it will be amended as needed to suit how things progress as it happens. The planned default sequence is:


Applications - A quick delve into some of the standard applications of Python:


This course is not intended to be trivial or easy, people should expect to be tried and tested, but people should not find themselves taken "out of their depth". The days should be hard work, but also they should be fun and enjoyable.

Learning programming and a programming language is a four to nine month activity for most people, so these two days will not make people professional programmers. If however you feel the urge to learn more about it, I am sure there are other courses you could go on...

EoEA: Apprenticeships are good for people and good for business & Born digital

What: Apprenticeships are good for people and good for business & Born digital

Apprenticeships are good for people and good for business
Huw Sayer

Huw Sayer will explain why apprenticeships benefit both employers and employees. His view is that investing in developing people is not just a social good but also an economic necessity. He will look at the value of social brands to businesses – and personal brands to individuals.

Huw’s passion is creating engaging conversations that empower people, build brands and inspire change. He specialises in helping clients spark such conversations with their employees, buyers and suppliers. This involves researching, writing and editing content for everything from annual reports to social media.

He has over 25-years marketing experience, including time as an account director and analyst. This has given him a detailed understanding of all aspects of business communications. He now runs his own communications consultancy, Business Writers Ltd, with clients across Europe. These include financial institutions, government agencies, industrial manufacturers, technology companies, and food and drink producers. 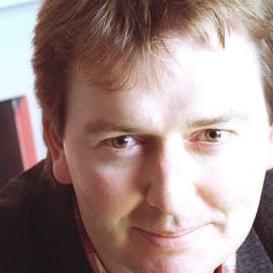 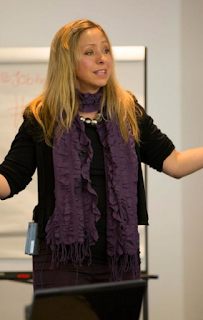 Posted by Paul Grenyer at 00:00 No comments:

Scala & Clojure Workshops with Russel Winder in Norwich in September

This hands-on workshop is aimed at people who currently program in languages other than Scala, who wish to gain an appreciation of Scala. The day comprises a short introductory session and then a sequence of problem sessions: each session will have a quick introduction to set the scene and give direction, a period of pair-working creating a solution to a problem, rounded off by a whole group period ("mob programming") creating a group answer to the problem. The sequence of problems starts from the very simple and leads through various features of Scala to end with some definitely not so simple things.

This hands-on workshop is aimed at people who currently program in languages other than Clojure, who wish to gain an appreciation of Clojure (and thus of Lisp). The day comprises a short introductory session and then a sequence of problem sessions: each session will have a quick introduction to set the scene and give direction, a period of pair working creating a solution to a problem, rounded off by a whole group period ("mob programming") creating a group answer to the problem. The sequence of problems starts from the very simple and leads through various features of Clojure to end with some definitely not so simple things.

Posted by Paul Grenyer at 07:39 No comments: