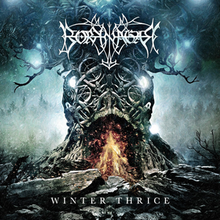 I was pretty sure I had seen Borknagar support Cradle of Filth at the Astoria 2 in the ‘90s. It turns out that was Opeth and Extreme Noise Terror, so I don’t really remember how I got into them now.

Whatever the reason was, I really got into their 2000 album Quintessence. At the time I didn’t really enjoy their previous album, The Archaic Course, much so with the exception of the occasional relisten to Quintessence, Borknagar went by the wayside for me.  That was until ICS Vortex got himself kicked out of Dimmu Borgir for allegedly poor performances, produced a really rather bland and unlistenable solo album called Storm Seeker, and then got back properly with Borknagar.  That’s when things got interesting.

ICS Vortex’s first album back with Borknagar is called Winter Thrice. Loving his voice and being bitterly disappointed with Storm Seeker I bought it desperately hoping for something more and I wasn’t disappointed. It’s an album with a cold feel and lyrical content about winter and the north. I loved it and played it constantly after release and regularly since. It’s progressive black metal which is the musical equivalent to walking through the snow early on a cold crisp morning. 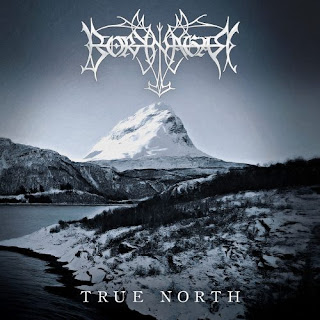 This year Borknagar released a new album called True North. When I’ve loved an album intensely and the band brings out something new I always feel trepidation. Machine Head never bettered Burn My Eyes, WASP never bettered the Crimson Idol. I could go on, but you get the picture. True North is another album about winter and the north. So I ought to have been on safe ground, but then Arch Enemy have pretty much recorded the same album since Doomsday Machine, but never bettered it. They’re all good though.

My first listen to True North was tense, but it didn’t take long for that to dissipate. I had it on daily
play for a few weeks, together with the new albums from Winterfylleth and Opeth. True North was so brilliant I thought it might be even better than Winter Thrice. So cautiously I tried Winter Thrice again, but I wasn’t disappointed to find it was the slightly better album. The brilliant thing is that I now have two similar, but different enough albums I can enjoy again and again and other than Enslaved’s In Times, I haven’t found anything else like it.

I hope they do what Evergrey did with Hymns for the Broken, The Storm Within and The Atlantic and make it a set of three. Cross your fingers for me.

Posted by Paul Grenyer at 19:09 No comments: