The Oxford dictionary defines an apprentice as ‘a person who is learning a trade from a skilled employer’. These days being an apprentice is so much more than that.

Providing the perfect platform to earn as you learn whilst taking your first step on the career ladder, apprenticeships have never been more topical.

There are many benefits to being an apprentice but we know that it can often be a daunting time too. You may be the only apprentice in an organisation, be the youngest member of the team and feel a lot less competent compared to colleagues with decades of experience in your field.

East of England Apprentices is about bringing together apprentices, past, present and future, to share their experiences, advice and socialise with like minded folk who are at a similar stage in their chosen careers. Our quarterly meet ups are packed with networking opportunities, presentations and the chance to chat and swap stories. 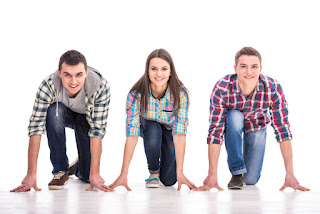 If you’re wondering whether an apprenticeship is for you then it's a unique opportunity to ask those who have already walked in your shoes and get some advice on the application process - as well as some inside info on what it's really like to be an apprentice.

Perhaps you’ve recently completed an apprenticeship and want to give something back; share your tips and hints for a successful apprenticeship with a new generation of apprentices?

East of England Apprentices is also open to businesses and organisations who are looking for an apprentice. If you’re looking to expand your team and kick-start someone's career through an apprenticeship then the group has the perfect pool of potential candidates. The same goes for companies who provide services to the apprenticeship marketplace, whether it's support services for funding or you’re an apprenticeship recruitment service.

An apprenticeship is a unique window into the world of work and East of England Apprentices is here to help you make the most of this exciting and enriching experience.

Join us on meetup: http://www.meetup.com/East-of-England-Apprentices/
Posted by Paul Grenyer at 09:21 No comments: 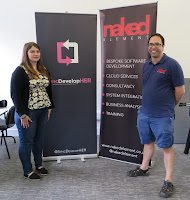 Naked Element are delighted to announce they will be sponsoring this years’ DevelopHER Awards. Committed to raising the profile of women in tech in East Anglia, the DevelopHER Awards will take place on the 25th November at The King's Centre in the heart of Norwich.

One of Naked Element’s Directors, Paul Grenyer, reveals “we want to support the DevelopHER Awards because we’re passionate about supporting and promoting women in technology. We’ve been big supporters of award hosts SyncDevelopHER since before the group began and we want to continue to show our support in any way we can.” Paul adds that the awards’ organiser Vickie Allen “is doing great things for women in tech in Norwich and we acknowledge the issue of a gender imbalance in the industry and that women aren't as encouraged to go into the tech industry as they should be” He adds “whilst more women certainly do need to be encouraged to enter the industry, more people in general do, as it’s an industry that isn’t going away and is only going to get bigger.”

Matthew Wells, also Director at Naked Element adds “the DevelopHER Awards present a great opportunity for us to add our voice to the local tech community and other decision makers in local businesses and show our support of an important issue - the lack of women in tech.”

As one of the premier software development providers in Norwich, Naked Element are sponsoring the Innovation Award. Matthew explains “we provide tech solutions for innovative businesses and are passionate about innovation so it was an obvious choice for us. We’re excited to see what the nominees have to offer and be a part of rewarding innovation.”

So passionate about finding out what the rest of the tech community has to offer and how they’re contributing to putting Norwich on the tech map, Paul will sit on the panel of judges and help choose a winner for each of the 12 awards. When asked what he will be looking for from nominees and ultimately a winner Paul revealed “someone who’s up-and-coming, someone who’s contributing to the tech community and has a can-do attitude. Ideally someone who’s going to help close the Norfolk skills gap and really be an ambassador for women in tech.”

On announcing Naked Element as a sponsor, awards’ organiser Vickie Allen comments “We’re really pleased to have Naked Element on board as they have such an established presence in the local tech community, a great reputation for getting involved with industry events and have a pretty impressive and far reaching list of contacts.” She adds “We asked Paul to join the judging panel as he runs the popular Nor(DEV):Con event so knows what goes into making an event successful, he’s got a really good understanding of what Norfolk needs and the awards fit really well with what Naked Element do - it was a no-brainer really.”

The DevelopHER Awards are a not-for-profit event funded entirely by sponsorship and are presented by SyncDevelopHER, a Norwich based community group, which runs regular meetups with the aim of promoting women in tech.

Applications for nominations are open and a full list of award categories can be found here. If you know an amazing woman in tech, nominate her for one of the awards and make sure that she receives the recognition she deserves.


For more information on the DevelopHER Awards visit www.developherawards.com. For sponsorship opportunities and to make a nomination contact Vickie at vickie@vickieallen.co.uk
Posted by Lenore at 14:12 No comments:

Roxette - Not even the look! 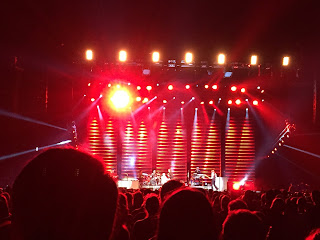 I’ve been lucky enough to see Pink Floyd, Iron Maiden, Europe, Marillion and many other bands whose musicianship and vocal talent is perfection. Sometimes I wish that I hadn’t.


I was on holiday with my parents in Richmond, North Yorkshire at the end of the 80s. I must have been about 12 and I had discovered radio. My parents had rented a little cottage just off the main square and every morning over breakfast the radio would be on. As they do, the radio station played many of the same songs from the current chart every day. One of them was The Look by Roxette. I loved it and the follow up, Dressed for Success. My friend at school had the album and another bought me the Joyride album when it came out a few years later. Then several years later I borrowed the third album from someone after a party. They’re a band I’ve always been into, even in their later, shamelessly even more poppy stages, and I’ve always wanted to see them.


I thought they’d split up until I saw them advertised at the NEC arena on my way into see Rammstein for the second time. I really wanted to go, but I didn’t get around to it until they announced their 30th Anniversary tour in 2014. I decided I was going and I’m glad I did.


I checked the set list before I went and I couldn’t have asked for it to be much better. Nearly all the hits (Almost Unreal was missing for some reason) and plenty from Joyride and Crash Boom Bang, so I was in for a treat! 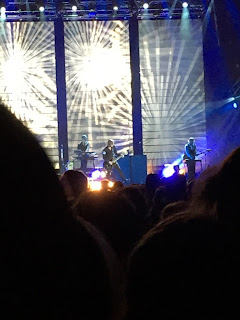 The support band weren’t up to much, but did have a wonderfully clear sound. Roxette didn’t. With the exception of Per Gessle the band were appalling and I’m sorry to say that included Maria who sat for the entire gig. It appears she couldn’t stand, but I have no idea why and Per didn’t explain it. The instruments didn’t gel and the lead guitarist was all over the place. Roxette have some fantastic guitar solos and piano parts, but it all sounded a mess. The solo and big fat guitars of Listen to Your Heart, were just murdered. Perhaps I have just been spoilt by other bands.


Per however sang brilliantly and was the complete pop/rock star. Maria had moments of excellence, especially at the end of Crash Boom Bang, but there was no consistency and it was clearly a struggle for her. Maybe sitting down restricted her range.

All that said, I had an amazing time singing along to every song I knew (which was all of them). It’s done now, I’ve achieved another goal, but I won’t be going again.

Docker up and running (on Ubuntu*)?

Do you ever have one of those days where it feels like you’ve wasted hours trying to get something to work that should be easy and it turns out you were just missing one vital piece of information and Google was holding out on you? You do? Me too! I had one of those days today.

I’m currently reading ‘Docker Up & Running’ by Karl Matthias and Sean P. Kane. So far it’s fantastic and I’m hoping the rest of the book is as good. As with most introductory books it has instructions on how to install it’s subject, in this case Docker, on a few different platforms including Ubuntu. In fact the basic install is just three commands:

The book then goes on to describe how to test Docker sing a Dockerfile and project which can be cloned from a Github repository. This is where everything fell apart for me. It didn’t just work out of the box. I even enlisted the help of my very good friend Dom Davis, who eventually helped me identify that I had an old version of Docker! In fact it looked like I didn’t have Docker at all, I had Docker.io. We then spent what felt like a very long time trying to uninstall Docker.io and install Docker using:

But we kept getting a message that Docker was already installed, but trying to run Docker gave us the message that it wasn’t installed and that we should install it with the command above. We were stumped and in the end I had to let Dom get back to what he was doing and I soldiered on. Eventually I stumbled upon this Stackoverflow post,  which explained that Ubuntu has another package called Docker and therefore you must install Docker.io! But of course the Docker.io package build for Ubuntu is an old version of Docker. Luckily the post also described how install the latest version of Docker.io:

And suddenly everything started working as expected, including the example from the book. I know they can’t cover everything, but it would have been great and saved me hours if the book had just mentioned this and instructions for installing the latest version of Docker had been included.

Hopefully this blog post will be easier to find than the Stackoverflow post and help others with Ubuntu install the right version of Docker.

* Actually I use Linux Mint, which is basically a nicer Ubuntu.

Posted by Paul Grenyer at 20:12 No comments: 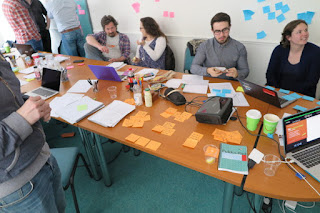 This full-day workshop will introduce the concepts and practices of designing and delivering applications composed of independently executing micro-services.

By the end of the workshop, you will have developed a component of a larger application, using Docker at every step of the process from development and testing through to deployment in Amazon Web Services.

Steve Engledow is head of software delivery for Proxama's cloud platform which is composed of services developed in a variety of languages but with a strong leaning towards Python.

Micro-services - what, why, and how?

Posted by Paul Grenyer at 10:02 No comments: