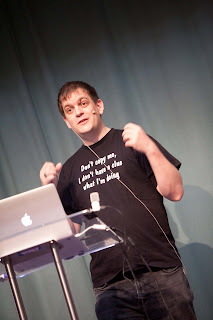 “Speaking at nor(DEV):con  is a good indicator that people know what they’re talking about”

If anyone knows the truth of that sentence, it’s Dom Davis. People in the tech industry know him for many different reasons – as CTO of TechMarionette, providing consultations through Somewhere Random, or perhaps even his YouTube gaming channels – but his speaking career was launched by nor(DEV):. “I started doing the local talks for the Norfolk Developers evening sessions, then speaking at nor(DEV):con, eventually graduating to larger and larger rooms at the conference. That eventually led to offers to speak from outside Norfolk.”

‘Outside Norfolk’ ended up being Israel. A conference over there was looking for interesting international speakers and found Dom’s talk from nor(DEV):con on YouTube. After negotiating travel arrangements, they flew him out to give the closing keynote. “Off the back of that I got to speak at Foundercon in Berlin. So now I can say I’m an international keynote speaker!” He’s also got talks at GraphConnect and ACCU coming up later in 2017.

Dom has also been engaged as a trainer as a direct result of being at nor(DEV):con. “I was asked to provide training on Go to others, based on the fact that I am a respected member of the community - Paul Grenyer’s opening keynote gave me glowing review! Speaking at Nor(DEV): is a good indicator that people know what they’re talking about.” Dom also bumped into the founder of one of the companies formed at the last SyncTheCity at the 2017 nor(DEV):con, who offered him consulting work. “There’s work and business to be done with all this talent and business in one place!”