The Iron Tactician: A Review 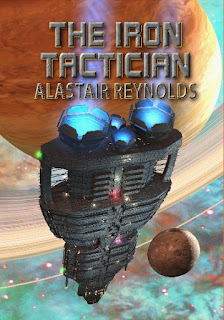 This book is quick and easy to read at only 98 pages. It’s a long way from being Reynold’s best work, but it’s enjoyable enough. Often I struggle to put books down, but not so with the Iron Tactician, not until the last 30% anyway, which I read in a couple of hours one afternoon.


Possibly the smallest number of characters Reynolds has ever had in a story I’ve read of his, each of them is likable and easy to relate to. A couple could have been explored in more detail.


It was clear there was a twist coming, but if the clues were there to what it was, I missed them and was oblivious right up until it was revealed, which is how I like it! Sometimes nothing spoils a book like a predictable ending and in fact there were two surprises for me!

I’m looking forward to Revenger which is released in just over a month (18th May), but I’ll be reading the next book in Peter Hamilton's Commonwealth Saga first, so it may be a while until I get to it.
Posted by Paul Grenyer at 17:07