A hand up, not a hand out 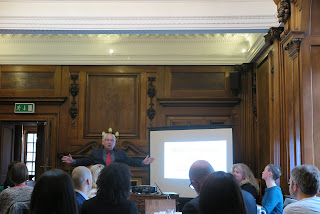 Cities, by their very nature, aren't small (unless of course you're a pretend city like Ely). According to Wikipedia there are over 141,000 people in Norwich and over 370,000 people in the ‘travel to work’ area. I've got a lot of contacts on LinkedIn, but these numbers of people are large by anyones’s standards!

Since I came back to work in Norwich for the third time in 2011, I've been expanding my professional network at an exponential rate. From time to time, and more frequently as time goes on, I encounter people I was at school with and Rebecca White was one of those people (although she was a year or two above me at Notre Dame High School).

Rebecca is a social entrepreneur and CEO of the social enterprise Your Own Place.  Your Own Place equips young people with the skills, confidence and knowledge to live safely and securely. They achieve this by continually developing innovative and entrepreneurial solutions as well as collaborating for the benefit of  young people. By working restoratively and delivering high quality interventions they create a culture of empowered and independent young people.

After a number of exchanges on linkedin, twitter and email with Rebecca, I was invited along to hear Baron John Bird, founder of the Big Issue, speak at the St. Giles House Hotel in Norwich. This was an unusual event for me to be invited to, as there was no tech or business angle, but we’re all familiar with the Big Issue and I was already  impressed with what Rebecca was achieving, so I was intrigued. On our way to the event my wife and I encountered the Big Issue seller who is often at the top of Lower Goat Lane near the Guildhall, and I couldn’t help but wonder if he knew John Bird was only meters away.

I was completely unprepared in almost every way for John Bird. We sat at the back, the only place there were two chairs left together, around one of a handful of tables shoehorned into the packed room on the first floor of the hotel. A couple of the usual suspects  such as Sarah Daniels from the Redcat Partnership and Lucy Marks of the Norfolk Network also wandered in. My first surprise was to discover that Sarah, who I know well, was chairing. I knew from that point on that with the self proclaimed, “loudest voice in room”, we were in for a fun couple of hours.

Baron Bird of Notting Hill was astounding.  A huge personality and presence in the room. He took us through the highs and lows of his life from his upbringing in Notting Hill by Irish, Catholic, racist parents to living on the streets of Edinburgh at 21, meeting one of the founders of the Body Shop, Gordon Roddick, his rehabilitation in prison where one of the “screws” taught him to read, his three wives, money, the Big Issue and admission into the House of Lords. John Bird was funny, entertaining, loud, inspiring and great entertainment. I’ve never seen someone move so much in such a small space, often with both arms in the air, a loud passionate voice and little respect for political correctness. It was refreshing.

26 years ago there were more than 500 homeless charities in London (there are now around 2000). All of them lacked something. None of those charities were helping the homeless to stop being homeless. John Bird had a vision, inspired by Street News in the USA and spawned from a case study funded by the Body Shop, the Big Issue was born. A way of helping homeless people make money to stop them being homeless. John Bird believes in a hand up, not a hand out and is working hard to prevent the next generation of Big Issue sellers.

I could have listened to him all evening. He finished by explaining some of the social ideas he’s pursuing, such as creating a Kitemark called the Social Echo to award to businesses who act on their social conscience.

One such social enterprise is Your Own Place. Following an introduction by Sarah, Rebecca White showed us a recent video which explains the work they do:

The event was over all too soon, but as well as finding out more about what someone I was at school with was up to, seeing some regular faces and making a new contact at Leathes Prior, I was inspired to contribute and am looking forward to Rebecca coming to speak to the Naked Element team at Whitespace.