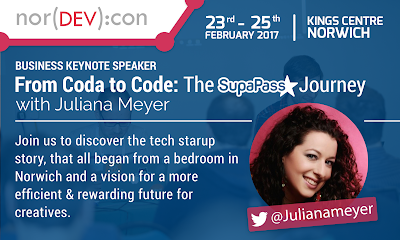 From Coda to Code: The SupaPass Journey
Juliana Meyer

Join Norfolk Developers to discover the tech startup story, that began from a bedroom in Norwich with a vision for a more efficient rewarding future for creatives, and has led to a globally recognised tech platform working with artists from major record labels.

About Juliana
Juliana Meyer is Founder and CEO of SupaPass, the fair-trade music streaming app. SupaPass gives anyone with a fanbase their own subscription streaming service. Fans subscribe to a specific creator’s channel from £1 per month and creators earn up to 100% net revenue share of their fan subscriptions.

Prior to founding SupaPass, Juliana Meyer ran her own label and was an award-winning singer-songwriter, including writing Norfolk’s Official Olympic Song for the 2012 Olympics. She also has a Masters Engineering Degree from Oxford University. One of the first steps in founding SupaPass was co-founding SyncNorwich in order to find and build the team.

Juliana also won the overall award at the 2016 DevelopHER awards.