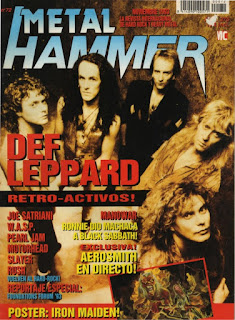 In the 90s there was a ‘Rock Music Magazine’ called Raw Power (later renamed to Noisy Mothers, before getting cancelled) which aired on ITV in the early hours of Saturday morning. I often saw it in the Radio Times and sometime in the early 90s started recording it. As my obsession for Rock and Metal grew I also started reading the fortnightly Raw Magazine, which in the late 90s transformed into a more indie based publication for one issue and then died. At the same time I was buying Kerrang! weekly, Metal Hammer once a month and at some point I had a subscription to Terrorizer magazine. Raw Magazine was always my favorite, but then it went crap and died, Kerrang! became like Smash Hits for Metal kids (or maybe I grew up a bit) and Terrorizer didn’t have enough of a range of metal bands to make it worth the subscription, so I was left with just a Metal Hammer subscription which I maintained for the album reviews so that I knew what was coming out.

Last week 2016 claimed another casualty, Team Rock, the company who bought Metal Hammer from Future Publishing. It appears they just ran out of money, stopped and brought in the receivers. This of course means that there is hope for Metal Hammer if someone can be found to buy it and/or Team Rock. Although it’s not feeling very likely.

In the late 90s I would read all the magazines I bought cover-to-cover. In more recent years it’s just been the album reviews, of the bands I recognised, and the odd interview if it looked interesting. Did that make it worth the subscription? Absolutely! Convenience is something I’ve been happier and happier to pay for as I’ve got older and having Metal Hammer drop through my door once a month and enable me to keep abreast of the latest album releases was fantastic.

I am going to miss Metal Hammer and inevitably miss album releases, which will mean I save a bit of money. The alternatives mean me taking positive action to follow bands on the internet, Facebook or Twitter and I’m unlikely to fit it all in.

I’ll be keeping my fingers crossed that someone acquires Metal Hammer, if not the whole of Team Rock and maybe I need to investigate a Terrorizer subscription once more.

Let’s just hope we don’t lose Princess Leia before the year’s out (or in the 2017 for that matter).