Nor(DEV):con 2017 Friday Keynote Speaker: Are you ready for the coming revolution? 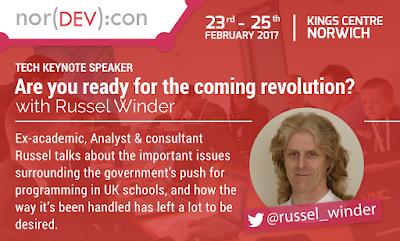 Are you ready for the coming revolution?
Russel Winder

UK school curriculum underwent a revolution as of 2014-09: ITC was replaced with programming (aka computer science). Whilst the change itself was campaigned for, and widely wanted, the way government handled the change left a lot to be desired. Some, but not all, universities and colleges have joined in realising the change and preparing for the consequent revolution in university computer science curriculum, c.2018 onward. Are businesses ready for the knock-on change?

This presentation will delve into some of the most important and/or obvious issues surrounding this world leading experiment in child education.

Ex-academic, Analyst & consultant Russel talks about the important issues surrounding the government’s push for programming in UK schools, and how the way it’s been handled has left a lot to be desired.

From 2015 ICT in UK schools is to be replaced with programming, but the way the government handled the change left a lot to be desired. Russel talks about some of the most important and obvious issues surrounding this world leading experiment in child education.