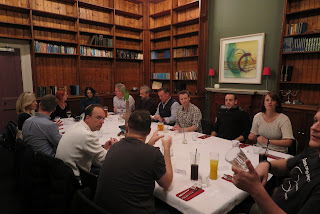 The idea “Networking” strikes fear into the heart of many techies, but Norfolk Developers Business or nor(DEV):biz is different. The idea behind the monthly meetings over dinner at the Library Restaurant is to get tech companies in Norwich and Norfolk talking to each other and referring business between themselves and from external parties. It’s not just about tech companies though, we also invite people from academia (City College Norwich was represented tonight and the UEA attended the very first event), those running complementary business (such as accountants, lawyers, recruiters, etc), those looking to engage software companies and even those looking to be employed by them.

"It was relaxed and much like having a good dinner with a selection of your wittiest and most worldly wise friends !"

Norwich has networking events coming out of its ears. nor(DEV):biz is different, not just because of the tech focus, but also because of the people who attend. Over the years Norfolk Developers has attracted the biggest personalities in the community (that’s you Dom Davis!) including many senior tech business owners. Yes, everyone has their one minute to speak to the group about who they are, what they do and what they’re looking for, but there’s no bell when your time is up and there’s humour, passion and interaction from the entire group. This isn’t just networking, this is building, bonding and rapport with people you may well work with in the future. It’s more than that, this is fun and raucous and entertaining. It’s a night out with friends rather than a pressure cooker for sales.

“Great event .Who would have thought that by having dinner with a bunch of techies I would learn that tomato ketchup is the best thing for smelly dog issues.. it just shows, never judge a book by its cover.”

At each nor(DEV):biz a member has the opportunity, not the obligation, to do a 15 minute spotlight. This is beyond their one minuter and the opportunity to give a more indepth overview of their business or something they are passionate about.

"Great evening arranged by Paul Grenyer and Dom Davis for the Norfolk Developers group. My highlight was Nikki and Tom Bool integrating the basics of Dog Training skills with leading a team in the workplace!"

For this, the fourth nor(DEV):biz, the spotlight was given by Nikki and Tom Bool. Nikki is a puppy trainer, while Tom runs a language services business, specialising in helping businesses market themselves and grow internationally. Nikki explained how to use positive reinforcement to encourage the right behavior in puppies, with some hilarious anecdotes. Tom went on to describe how similar techniques can be used to help foster the desired behavior in the people you work with. The spotlight fulfilled my favorite criteria by being both informative and entertaining.

"What a smashing group of people and thoroughly enjoyable puppy behaviours reflection on office management. "

You know you’re onto a winner when you have to encourage people to leave and the conversation has moved from the table to a huddle by the doorway.  I’m already looking forward to the next nor(DEV):biz in November where we’re hoping to hear from Laura Flood and Anietie Ukpabio of City College, Norwich, about the young people they’re training to be software engineers.

If you’d like to attend nor(DEV):biz, please drop Paul an email on paul@norfolkdevelopers.com.