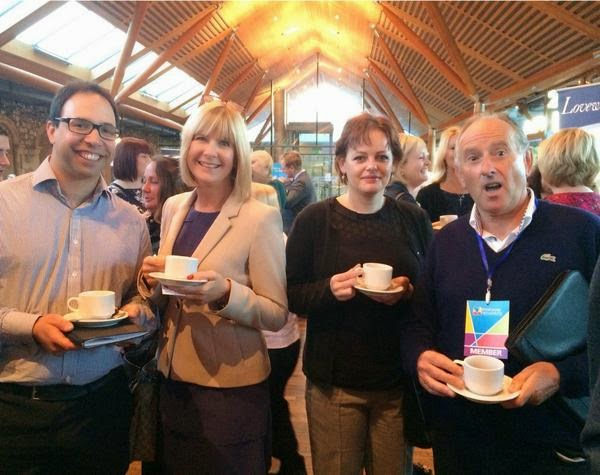 There are loads of networking groups in Norwich, even more than there are tech groups! I haven’t been to that many. In fact it’s only four. There’s an breakfast club that I attend every other Thursday, another run my Lorna Burrows that I tried once, the BNI and now Breakaway Networking.

Breakaway Networking meet at the Refectory at Norwich Cathedral every Thursday morning at 7am. I was invited along to their ‘Big Breakfast’ by Nick Applin who is their current chairman and runs his business out of Whitespace, just like Matt and I do with Naked Element. The Big Breakfast happens every 6 months or so and involves inviting lots of guests and listening to a guest speaker. I believe that their regular meetings are smaller affairs, attendees being predominantly members. I’m looking forward to finding out.

The Big Breakfast started off with the usual informal networking over tea and coffee. I met some new people and bumped into some of the usual networkers I see everywhere (you know who you are!). At around 7.30am we all took to our tables in groups of about eight and Nick welcomed us all and suggested we did a quick round table to get to know each other before the food arrived. This we did. On my table I was joined by someone from the Benjamin Foundation, Breakaway’s charity for 2014, someone who worked in Health and Safety, another who cleaned computer workstations, a bathroom designer and fitter, someone in HR from Office to Office, a recruiter and singles matcher and a security consultant (the traditional kind, not internet security). All of them had a story to tell and all of it was interesting.

Following the breakfast Nick introduced Lee Todd, director at Just Regional, a local news magazine. Lee gave a fantastic talk and described how he saw the way news is consumed changing and suggested to Archant that they start a publication that concentrates more on local news. They weren’t interested so he left Archant and started up on his own, working a number of jobs to fund his dream. Just Regional is now very successful and employs a number of people.

The morning was rounded of with a presentation of £1000 to Break. About £350 was raised from the Big Breakfast and the members of Breakaway made it up to £1000.
Posted by Paul Grenyer at 14:34