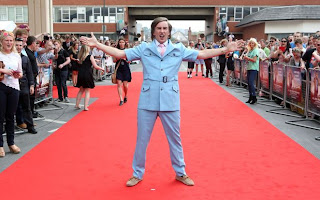 The best thing about this film is the soundtrack. It was great to sing along to Roachford, John Farnham and the others. The next best thing about this film is trying to spot all the places they filmed in and around Norwich. While singing along to Cuddly Toy in the opening credits, Alan drives into Norwich along the Dereham Road and over the Bowthorpe roundabout and then somehow onto a dual carriageway with an armco barrier! Evidently this is some sort of secret sci-fi film and he’s accidentally driven through a wormhole.

The film itself was ok. Steve Coogan plays the anti hero Alan Partridge very well. The character is a pretty horrible, self obsessed man. I enjoyed the references to Marillion (didn’t know they’d sold over 15,000,000 albums though), but was disappointed to find the actor wasn’t really one of their multiple early drummers and he looked nothing like Ian Mosley. Sean Pertwee was superb, as he is in everything.

There’s no real story to Alpha Papa. It’s all very predictable and there’s no twist. However it’s an excellent showcase for Norwich, even though it is obviously making fun of the people and the place. I’m glad I went to see it, but I won’t be getting it on bluray.
Posted by Paul Grenyer at 09:09