NorDev 3 Review: Choosing an appropriate language & Killing pigs and telling people about it 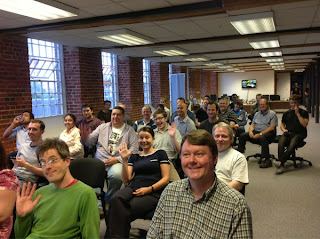 At the last Norfolk Developers meeting in July numbers were low. Only 17. There were a few factors that probably contributed to this. The July event was only a couple of weeks after the June event and SyncNorwich had their first birthday party the night after. And of course they had beer and cake! And it’s the summer. Lots of people were on holiday.


At Norfolk developers last night however the numbers were back up. When you consider the technical focus of Norfolk Developers compared to the broader appeal of some of the other community groups in Norwich, 38 is a good number. What’s more is that a lot of potential regulars were on holiday. I think we’ll see much bigger numbers in the future. Less than 24 hours after RSVPs opened for the next Norfolk Developers meeting in September, 28 out of 60 places have already gone.


Last night saw Basho’s third trip to Norwich this year to speak to the local tech community. This was the first time they came to give a technical talk, rather than a sponsors presentation. It’s been long overdue. Christian Dahlqvist gave us an overview of the Riak database.


Straightaway members of the audience were asking questions and keen to understand how Riak worked and how it compared to other NoSQL databases and to SQL databases. I suspect the whole session could have been run as a discussion the full 45 minutes. The lack of transactions in NoSQL databases is probably a topic we could devote an entire session to.


Christian explained how Riak nodes should be configured and how the data is distributed among them and that you can go to any node to retrieve data. You don’t have to go in via a master or through a load balancer.


Riak doesn’t run on Windows and Basho don’t officially support a .Net driver. However there is a well supported community .Net driver. Apparently they’ve yet to find a customer who wants to run Riak on Windows. I find this astounding. Riak does of course run on Linux and on Mac OS. They officially support drivers for Java, Ruby, Erlang, PHP and Python. There are a number of other community drivers available for other languages.


Christian is an extremely good speaker. He clearly knows his stuff and the Norfolk Developers crowd certainly put him through his paces. We love speakers who interact, make us laugh and above all, know their subject matter. Christian has agreed to come back and see us again.


I have known Russel Winder a long time. Probably more than 10 years. We’re both members of the ACCU, originally a group for C and C++ programmers, but now encompassing programmers and other software related professionals from many disciplines. The ACCU run conferences and produce a couple of regular journals (are you seeing the similarity to NorDev yet?). Russel and I have seen each other speak at the ACCU conference and at various other times in London. We’ve both written for the ACCU magazines and I even published one of Russel’s articles when I edited an issue. All in all it was about time that he got himself up to Norwich to share some of his considerable knowledge and experience with the community here.


As well as being experienced and knowledgeable, not to mention opinionated, Russel is the very definition of “a character” and I was looking forward to seeing how that would play out with Norfolk Developers. Russel was nothing short of sensational. He had the group laughing along from the off and of course there was plenty of questions, audience participation and banter throughout. We were taken through an amusing tour of some of the greater and lesser known programming languages, from Java and C++ to Python, Fortran and even Rust, which I had never heard of. All of the Microsoft .Net languages were conspicuous by their absence, but this of course was by design.


Some years ago Russel got a reputation for claiming that Groovy was the answer to everything. Only ten minutes in we got the first mention of Groovy and it was mentioned at least twice more before the end. Russel talked about the level of abstraction of languages and systems and about declarative vs imperative languages. Russel is an expert in concurrency and parallelism and explained how these concepts are no longer a choice, but a necessity in a world full of multicore processors. Finally Russel took us through many of the different build systems that have been developed over the years and reminded us what we already knew, that XML is evil and not the answer to anything.


The reaction from the audience was clear, they had enjoyed themselves and there were several people asking questions after the session had finished. I am sure we’ll see Russel back in Norwich before too long.

At the next Norfolk Developers event we’re hearing about Agile at Redgate and we’re back with NoSQL in the form of Neo4J. Sign-up here.