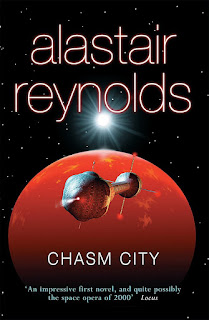 Following the announcement of the release of Inhibitor Phase and then Elysium Fire I’ve been rereading some of the previous Revelation Space novels to pick up the thread. First time around I found Chasm City a dark story and it was no different the second time, but I got so much more out of it. I also remember losing the thread towards the end the first time, but not this time!

As with most of the series, the thread of the main story is inconsequential to the main Revelation Space arc. It’s the other aspects of the story which tie up with other Revelation Space events which make this such a fantastic book. By the time I read the last page I knew that Sky's Edge was named after the edge Sky Hassausman had over the other ships in the flotilla which settled the planet. I knew that the war had started between the ships of the flotilla and what they were fighting about. I knew how the Melding Plague had got to Chasm City and how it was discovered and spread. I knew that Sky had met Khouri, who is an important character in the main trilogy. And more, much more! I wish I knew how the Melding Plague came to be though.

I read the second half of the book in about two weeks. I just couldn’t put it down!