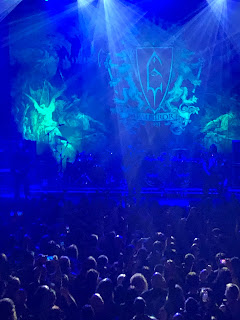 Overall I really enjoyed Incineration Fest and would go again if the line up is right for me. What was really great was seeing metallers back at gig with no restrictions and doing what we do best!

I completely fell in love with Winterfylleth when they played Bloodstock on the mainstage and even more so when they released the set as a live album. They are incredible and totally deserved to be opening proceedings at the Roundhouse for Incineration Fest. Actually, they deserved to be much higher up the bill. They’re a solid outfit, played what I wanted to hear and ended, as I always think of them ending from the live album, with Chris saying this is the last song “as time is short and our songs are long!” I need to see them do a headline set in a venue with a great PA soon.

Tsjuder was the wildcard for me. I didn’t really know them and had heard only a few things on Spotify before, although what I heard was really good. I had no idea I was going to be blown away. They sounded incredible from the first note, which was even more impressive given that they are only a three piece and the PA in the Roundhouse wasn’t turning out to be great for definition.

Bloodbath was really the reason I was at Incineration Fest. I’d missed them at Bloodstock ten years before as one of my sons was being born and I hadn’t had a chance to see them until now. Of course now Nick Holmes (Paradise Lost) rather than Mikael Åkerfeldt (Opeth) was on lead vocals.

I was very, very excited and from the moment I heard that trademark crunching guitar sound I was even more excited. They played for a full hour. Unlike the Black Metal bands on the bill there was more riffing and solos and a slight different drum sound.

They’re an odd band to watch. For reasons I don’t understand, the bass player and two guitarists would often turn their backs to the audience to face the dummer. The band didn’t seem to interact much with each other on stage and even less so with Nick.

Nick’s deadpan humour was present when he did speak to the audience. He introduced the band as being from Sweden, then added from Halifax almost as an afterthought! During the set he admitted he couldn’t see and dispensed with his sun glasses as they’d apparently been a good idea backstage. After breaking the microphone he enquired if it would be added to his bill at the end of the night.

Emperor hasn't released any new material (that I know of) since 2001 and, if I’m honest, I barely listen to them beyond the live album these days. I’ve seen them at least three times before, the first time being in 1999 in a small club in Bradford on my birthday - it doesn’t get much better than that. I’m more of a fan of Ihsahn’s solo stuff these days and I still really enjoy Samoth’s Zyklon whenever I play it. Emperor, not so much anymore.

They played for the full ninety and for the most part were solid as you might expect. Whether or not Faust plays with is of no consequence to me and I certainly didn’t need to covers they played with him towards the end of the set. There was lots I knew and lots I enjoyed, but I wouldn't make an effort to see Emperor again.