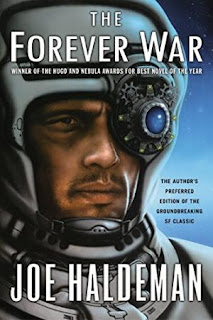 I don’t remember who it was, but someone suggested I read The Forever War when I got into the Space Operas of Alastair Reynolds. I couldn’t find it on the kindle for ages, so a hard copy of the omnibus edition sat untouched on my shelves for quite a while. Then it became available on the kindle.

The Forever War Book 1 is good, I enjoyed it. I liked the characters and the first person style works really well. I am sure in the 60s it was revolutionary maybe even shocking, but, as with a lot of old sci-fi, it is of its time and feels antiquated next to the technology we have today.

In terms of scope, it’s nowhere near as vast as anything by Alastair Reynolds and I think this was my biggest disappointment. I was interested to read that a lot of the inspiration for the story came from the author's experience in the Vietnam war. If it hadn’t been mentioned I certain wouldn’t have known. I did spend a good deal of my reading time trying to see how the futuristic battles and enemy might relate to the Vietnam war.

The two sequels were written much later. I’m hoping they’ll be better.