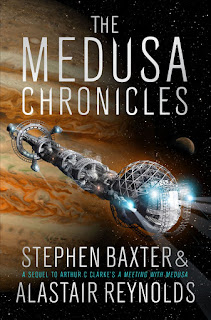 Arthur C. Clarke was my favourite author for many years and I loved his collaborations with Stephen Baxter. Baxter brought a new dimension to Clarke's, not just science fiction, but science based fiction. The stories became more human, more exciting and had better characters. So when my current favourite author, Alastair Reynolds, got together with Stephen Baxter to write a story based on other writings by Arthur C. Clarke it had the potential to be something fantastic. And it is!

I love stories with references to other stories and pop culture and the Medusa Chronicles is riddled with them. I've complained about Interstellar (film) being a rehash of Clarke's 2001 in a previous review and there are plenty of references and similarities to 2001 here, especially with the exploration of inner Jupiter and the events which take place inside the sun.  However, in the Medusa Chronicles, this is the amazing climax to an all round superb story.

The main character, Howard Falcon, is superbly flippant, sarcastic, cynical and intelligent. He is surrounded by other equally brilliant and well thought out characters. The machine, Adam, is one of the better rehashings of HAL and captures, the young and naïve, yet brilliantly intelligent and developing intelligence perfectly.

If, like me, you're longing for Reynolds to recapture his Revelation space glory, then the Medusa Chronicles, along with Slow Bullets, is the book for you and it goes a long, long way.

Next I'm moving on to The Forever War by Joe Haldeman. A new author for me and, apparently, superb space opera.
Posted by Paul Grenyer at 21:05