A review of React Cookbook: Recipes for Mastering the React Framework 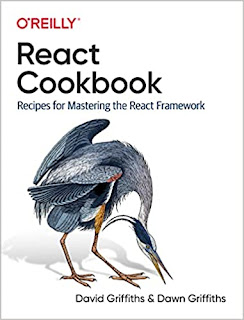 This is a book of about 100 recipes across 11 sections. The sections range from the basics, such as creating React apps, routing and managing state to the more involved topics such as security, accessibility and performance.

I was especially pleased to see that the section on creating apps looked at create-react-app, nextjs and a number of other getting started tools and libraries, rather than just sticking with create-react-app.

I instantly liked the way each recipe laid out the problem it was solving, the solution and then had a discussion on different aspects of the solution. It immediately felt a bit like a patterns book. For example, after describing how to use create-react-app, the discussion section explains in more depth what it really is, how it works, how to use it to maintain your app and how to get rid of it.

As with a lot of React developers, the vast majority of the work I do is maintaining existing applications, rather than creating new ones from scratch. I frequently forget about how to setup things like routing scratch and would usually reach for Google. However, with a book like this I can see myself reaching for the easy to find recipes again and again.