A Clash of Kings a Review 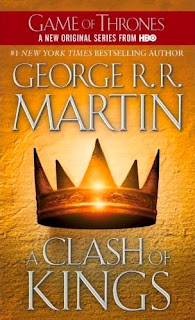 I loved the Game of Thrones TV series Even the way the final series ends. Although I’m not sure I would have chosen the eventual king. I was looking forward to reading the books and understanding the stories in more depth and, to an extent, that was the case. More so with the first book than the second.

A Clash of Kings just has too much irrelevant detail and quickly becomes laborious to read. A part which stands out is after one of the battles where there are many pages given over to a list of knights who were awarded honours. The vast majority were in no way relevant to the story and just prolonged getting to the end. Fortunately the last 3% (I was reading on kindle) was given over to an appendix so I was able to skim that.

There were a number of key events from the TV series, not least of which Bron lighting the wildfire with an arrow, which I was looking out for and were disappointingly missing. Of course the book is the original and these events were invented for the TV series, but still.

I’m told the books get better from the third one onwards, so once I’ve got through Inhibitor Phase, Dune and one or two others I’ll be back. I’ve started now, so I need to finish.