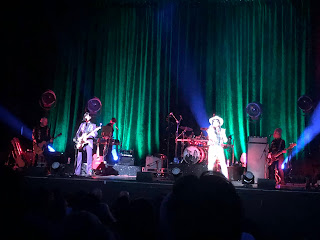 I was very surprised and excited and then immediately disappointed to see Shakespere Sister on the Graham Norton show. They performed Stay, which is their big hit (longest single at number in the UK be a female artist, 8 weeks), but Marcella wasn’t even trying to hit the high notes and it was awful. We decided to go and see them on tour anyway as it was potentially a once in a lifetime experience before they fell out again.

The Ipswich Regent was half empty in the stalls and the circle was closed and oddly there were quite a few security guards - apparently at the request of the band. Encouragingly Shakespear Sister came on on time and they sounded good! As they ploughed through many of their well known songs, new songs and a few older more obscure songs, the vocals were strong from both Marcella and Siobhan.

The rhythm section was incredible.  The drumming was tight, varied and interesting, but what really stood out was the bass. I think part of this was that the player had fantastic bass lines to play, but also oozed talent. It’s really uncommon for a bass player to need to change bass guitars between songs but Clare Kenny swapped frequently. It’s just a shame that the lead guitar player was totally unremarkable and I’ve no idea what the keyboard player was for.

The highlight I, and I imagine many others, had been looking forward to was Stay. It was better than with Graham Norton, but it’s clear that Marcella can not get to the highest notes and live, she doesn’t try. It was still a good performance of a fantastic song.

Would I go and see them again? Probably not, unless I was dragged.