Alastair Reynolds is on form with this steampunk meets pirates space opera. 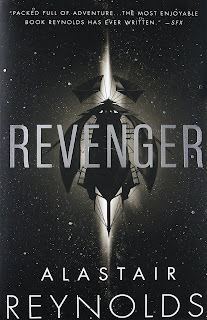 Alastair Reynolds is on form with this steampunk meets pirates space opera.

The story is cliched and almost totally predictable, but very enjoyable at the same time. I’ve started wondering a lot recently, if they body count in such stories is worth the life of the person who is being rescued and I think that remains to be seen in the sequel.

Fura Ness is extremely driven and I struggled to understand a lot of her decisions.

As with much of Reynolds’ work, there is no explanation for why this universe is the way it is and it feels as strange as when the clock strikes 13 in 1984, but makes me want to read more in the hope of understanding.

While most of the story is linear and complete, there’s a large chunk towards the end which feels missing. The climax is a little brief and just like in terminal world there is suddenly a lot of new plot in the final chapter.

Where the story goes next will very interesting.