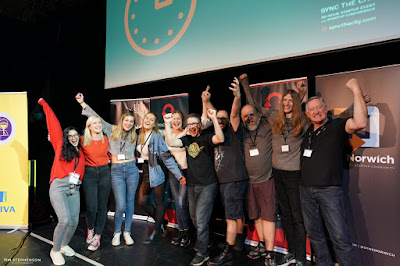 Sync The City is an annual event that brings together budding entrepreneurs and developers to pitch and build a start-up in just 54 hours. This year Naked Element's Director Paul Grenyer was a mentor for one of the teams and they had great success with their idea ‘Seren’, taking home one of the prizes!

Paul says “John Fagan has asked me to be involved with every Sync the City since it started five years ago, but this is the first time I've been in a position to commit to the 2.5 day event. Originally I was providing technical support via nor(DEV): but Sync the City were short of mentors so I was embedded into team Seren. I had to put my work for Naked Element on hold but I was more than happy to do so to be part of the event. My only regret is that I wasn't able to do it sooner!”

Lily Beel, a trainee solicitor at Leathes Prior, explains the idea behind her winning pitch, saying “the general idea was to connect those beginning to suffer from mental health conditions with those who have recovered/are in recovery. The waiting time to be seen through the NHS is 9 months for mild/moderate conditions - which means that people are likely to get worse during that period. If they had someone to talk to, who had been through similar mental health issues, it might stop them from reaching a crisis point and harming themselves or worse.”

“I pitched it by providing figures received from different organisations about mental health and how long it takes to be seen. I explained that it would be good to have venues which allow people to connect and chat (whether about their mental health directly or about other subjects)”

Lily and the team of eight worked together under Paul’s mentorship, to build the business start-up, but the process was not without its obstacles. “It was particularly difficult to work out how to reach those suffering and how to fund the charity. We overcame this hurdle using research and speaking to people. Contacts are invaluable - as you are limited to 54 hours, you need all the help you can get!”

But this wasn’t the hardest part of the process, as Lily had never taken part in Sync the City before, let alone made a business pitch, she found the idea of doing this in front of everyone a daunting prospect. “I wanted to make sure I got the point across as I feel really passionately about mental health and feel that more needs to be done - it was hard to keep my emotions in check when I was pitching. We had a performance workshop beforehand and my team were incredibly supportive, which really helped.”

“When we came out of the workshop with the performance coach” Paul adds, “I was really pumped up, as I knew Lily had something special and the drive and talent she exhibited had the potential to go a long way.”

Between Lily, her amazing team and the support of Paul and all the other mentors and experts, team Seren took home the People’s Choice prize and £1000 between them! Paul says “I put winning down to the amazing drive and determination of Lily BeeI and to listening to the other mentors and following their advice.”

“Sync The City is so important to Norwich and the tech community for so many reasons,  but mostly because it helps get new ideas off the ground and is great for the tech community, especially the collaboration with the UEA which brings so many business and computer science students to the event.”