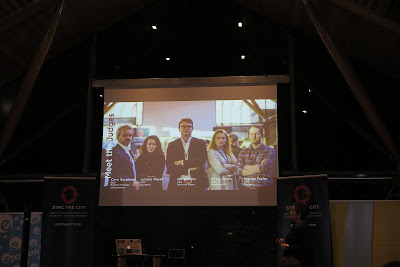 From the moment I walked into the refectory at the Cathedral, ahead of the Saturday night pitches, I felt there was something special going to happen. It wasn’t until the pitches actually began an hour or so later, that I realised exactly what it was.

I’m ashamed to say I’ve never been to Sync The City, despite it being in its fourth year. The idea behind the event it to build a tech based startup in just 54 hours and then pitch for funding at the end. It was these final pitches I had come to see.

Twelve startups waited anxiously for Fiona Lettice, the Pro-Vice-Chancellor of the UEA, SyncNorwich and Sync The City organiser, to make her introduction to this year's event. She described Sync The City as The Apprentice crossed with Dragon’s Den, with all the tension and hard work compressed into a little over two days. With this, and the prize of £3,000 in funding on their minds, the twelve groups began their pitches.

When I’d been in the refectory earlier there was clearly some concern about these pitches, but every single one was excellent. I was expecting lots of hesitation in the delivery, having been put together under the pressure of the time limit, but there was hardly any. The styles, methods, number of presenters, etc. for each pitch varied greatly, which helped keep my interest to the end.

By only the second pitch I knew what it was that felt special when I had arrived. It was the sense of comradery shared by everyone who was taking part - a real feeling that they were all in it together, regardless of who won at the end of it all.

There was a clear winner for me - a team called Footprint whose product helped individuals identify all of their data on the internet.


The People’s Prize, as voted for by the audience, went to Unwind, a chatbot intended to help with mental illness.

The runners up were a team called ViaCab who were developing an app for hailing Black Cabs.

The explosion of excitement from the winning team and the audience alike was incredible! After Lone Safe were led off to sign the paperwork for their prize money, and Sean Clark brought the event to a close, they could be heard still celebrating in a side room, excited to be able to make their startup a reality.