The Kings of Leon 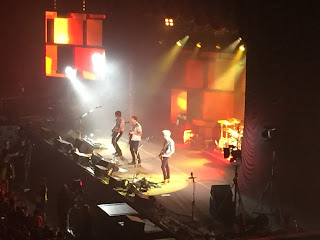 Sheffield is in the North and things, well people, are very different in the North. They’re friendlier than other places. They apologise in a friendly way when they knock into you and several people run after your ticket when it blows away in the wind after you’ve been through security.

Given the recent events in Manchester security was tight at Sheffield Arena. There were plenty of police, some of them visibly armed. You weren’t allowed to take in a bag any bigger than A4 and everyone was searched before they could enter the arena foyer. Having said that, we had no problems parking (getting out of the car park was a different matter) and were through the security check in no time. Everyone there, including the security, was friendly! Even the armed police were posing for selfies and chatting at the end of the night.

I’m not a fan of the Kings of Leon. They’ve got a few good songs, I mean who doesn’t like having their sex on fire? I find them bland, monotonous and a bit boring. Live it’s a different story. They’ve still only got one sound, but it’s much more palatable and they’re very good at it. The lead guitarist can play, but is nothing special, the bass player looks like Billy Idol on a good day and the drummer spent most of the show chewing gum and blowing bubbles, but the singer, his range and the effortless delivery were incredible. He just needs to work on his interaction and eye contact with the crowd. 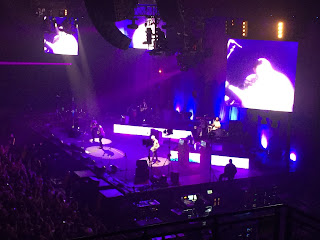 What was also quite cool was, about halfway through, a complete stage rearrange, the moving of the drum riser and the introduction of a third guitarist and a keyboard player all performed behind a curtain with sometimes just the front man and sometimes all of the main band playing out the front. It was fun, exciting and interesting to see.

They played most of the hits, as far as I could tell and didn’t do an encore, which always makes things easier and means you get more music and less messing around.