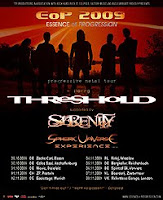 Threshold are simply amazing. Ok, so they are my favourite band, so I may be a little biased. I have seen them six times now, almost as many times as I've seen Terrorvision and the Wildhearts, and they get better every time.

Threshold should be playing places much, much bigger places than The Peel in Kingston, but I am so glad they aren't. In these tiny venues you can get right up and personal with the band. Not only that, but the band walked into the Pizza restaurant my friends and I were enjoying before the gig, Damian Wilson was on the door talking, as he always is and the remainder of the band were reportedly in the bar signing stuff after the gig.

With no support they played a stonking two hour set with something from every album except Psychedelicatessen:

Encore:
One Degree Down
Light and Space

Damian Wilson only sang originally on two of the songs in the set (Sanity's End and Clear), but he makes every song his own. At the end of a Fish gig I look forward to him pirouetting into the crowd during External Exile. Damian must have been into the crowd four or five times throughout the set, mostly due, I imagine, to the lengthy instrumental breaks in most of the songs. Forget Freddie Mercury, Damien Wilson is the ultimate frontman and his charismatic ability as frontman is second only to his incredible singing ability. It's going to be interesting to hear his vocals on a new Threshold album for the first time since 1998's Extinct Instinct.

I could listen to Karl Groom play guitar all night! In my opinion he is second only to David Gilmour, but he looks like someone's uncle! In fact all of the band and a lot of the crowd are firmly into middle age. Does it show in the heavy progressive metal they play? Does it stop the crowd being louder than the PA? Of course not!

I can't wait for the new album and to see them play again. If you only every see one progressive metal band, make sure it's Threshold!
Posted by Paul Grenyer at 17:39