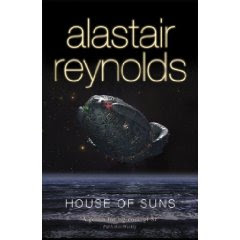 This is much more like it! Reynolds' best work outside of his Revelation Space series. I loved the characters, their interaction and the way he swapped the first person between the two main characters and the young Abigail Gentian.

From reading the back of the book, which describes Abigail Gentian splitting herself into multiple clones, two of whom fall in love, I was expecting the two lead characters to both be female. Maybe that would have been a step too far?

Reynolds describes this book as stand alone on his website. I'm really rather hoping there will be some more.
Posted by Paul Grenyer at 12:15